Your safari myths, BUSTED! Do female lions do all the hunting? 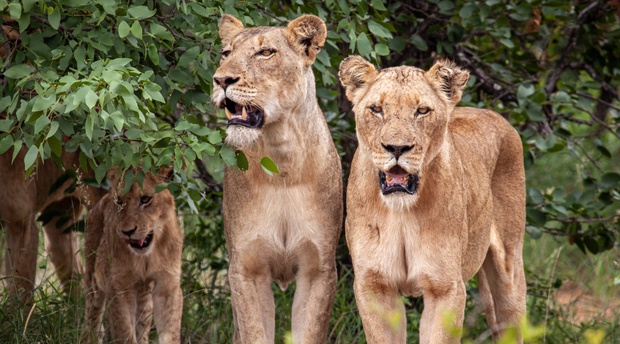 In this series of articles, guide Elly addresses some of the most common questions we hear on safari and takes the time to clear up a few misconceptions along the way. Want to see if your myth is busted? Then read on!

Myth: Female lions do all the hunting

This is a very common question that I get asked on safari and one to which the simple answer would be "Yes" but the more complex answer would be "Yes, but...", meaning there is a little more to the story of why it is or isn't so. If we delve deeper into the social life of lions, their behaviour and their roles within the pride, we get a clearer picture as to why male lions are commonly portrayed as lousy hunters.

Physically, what differences do you see between the sexes? Male lions are much larger than females (yes, this is certainly a benefit when it comes to bringing down larger prey as I will soon discuss), but they also carry a big, beautiful mane of thick fur. With colours ranging from brown through to black, the mane is believed to have evolved to protect the most vital parts of a male's body, namely the head and neck, when they are engaged in fighting. From the point of view of the pride, the male is the father and protector; the one who will put everything on the line to defend his territory and his family. However, this conspicuously-coloured mass of fur also spoils a lion's camouflage - an important factor when it comes to hunting - whereas lionesses are better able to blend seamlessly into the tall, dry grass. 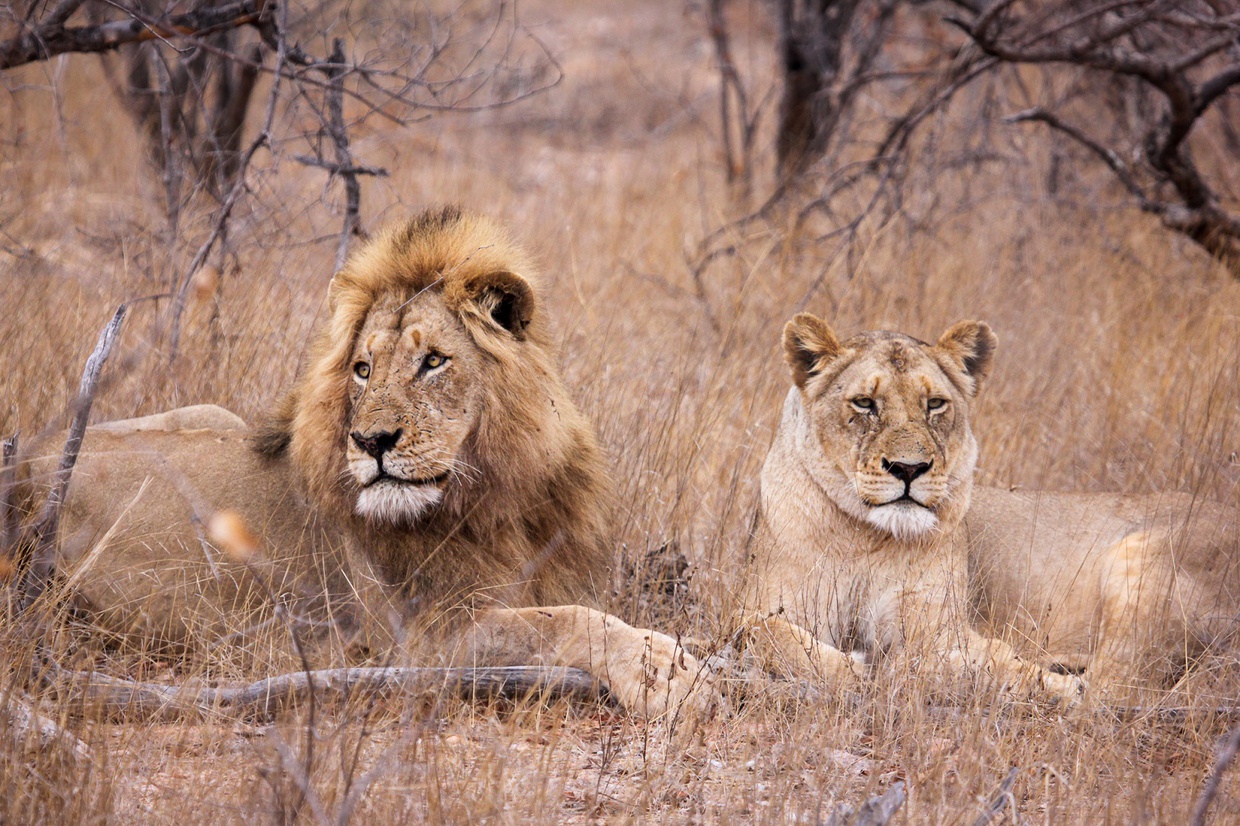 Given the role the male plays within the pride, and his inability to conceal himself as effectively as his female counterparts, he is often omitted from the hunting duties. Instead, the females are the nurturers and providers, often hunting as a team and allowing the dominant males to enjoy the spoils of their efforts before anyone else. However, this is not to say that male lions are inept at hunting for themselves. In fact, there is a period of time in a young male lion's life in which he is forced to leave the safety of his mother's pride and venture off nomadicly, whether as part of a coalition of related males or by himself. During this time, if he doesn't learn to fend for himself he will starve.

Coalitions of young males will often scavenge from other, less powerful predators like cheetah and leopards, but will also develop the skills required for hunting through practice and patience. At this point, their manes are still relatively underdeveloped and lightly coloured, and therefore less likely to impact their camouflage. It is only once these males are big and strong enough to take over a pride of their own that they will be afforded the provisions of their pride members. When this time comes, they may also be required to assist the females in bringing down prey that is too large for them to handle alone, such as Cape buffalo and giraffe. Their size and strength certainly becomes their greatest asset in this regard. 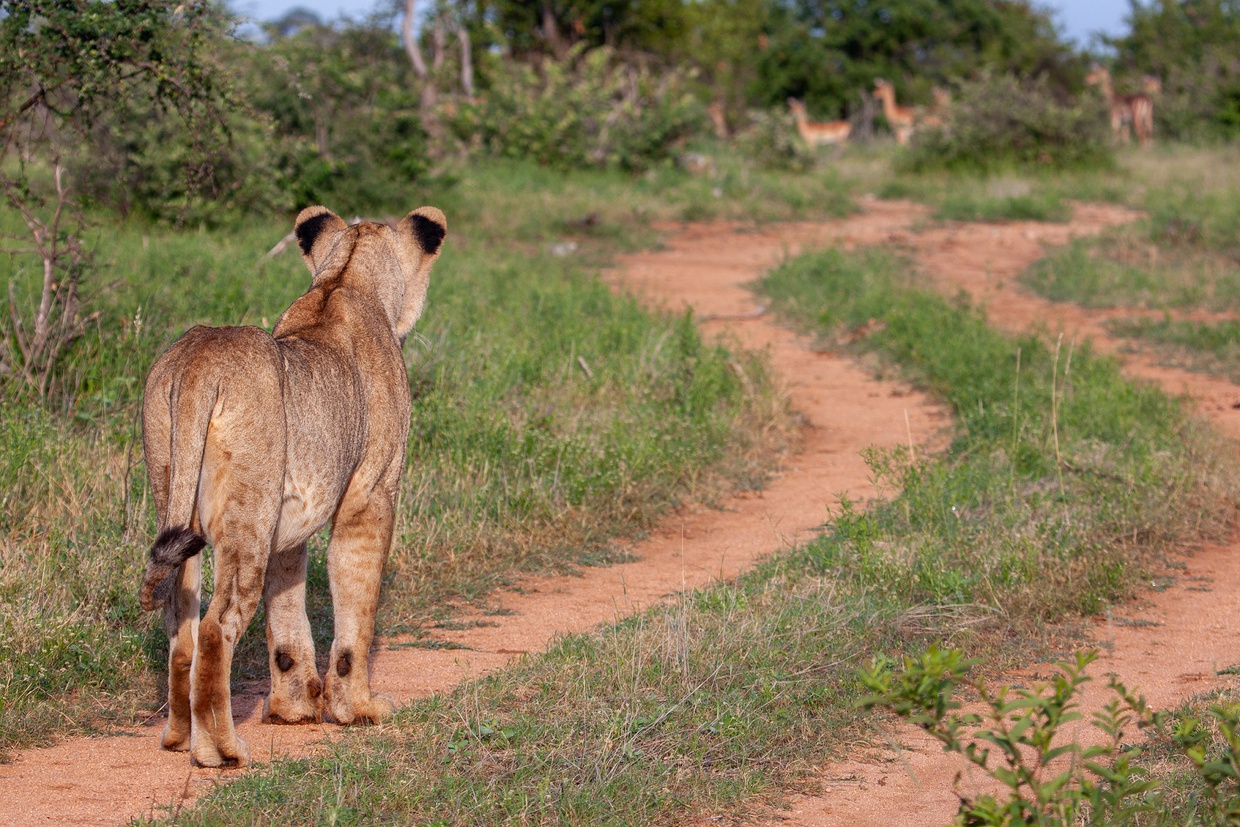 Finally, and contradictory to popular thought, male lions are not always with their pride. These protectors will leave the females and travel vast distances when patrolling their territories, fighting off any unwelcome intruders. It is during these times that we see coalition males harnessing the experience from their younger years and hunting together, and we have enjoyed numerous sightings of male lions enjoying the spoils of a successful kill in the absence of their female providers. So, to summarise: YES male lions are incredibly skilled and clever hunters but the females will often provide for their protectors when they are around. Consider this myth: BUSTED!

If you enjoyed reading this article, please click the 'Share this post' button on the right to allow other people to learn something new today too, and stay tuned as we continue to bust more safari myths and misconceptions!

Article and photos by Elly Gearing.