Wild Dog vs Hyena: a Struggle for Survival

Every guide knows that luck plays a big role when it comes to safari in an open bush system like the Klaserie. For every action-packed game drive, you can have just as many where nothing much happens. Yet, all it takes is half a second for everything to change.

By Elly Gearing, Lead Guide for Klaserie Sands River Camp
As published in the Klaserie Chronicle

This unpredictability is particularly true of encounters with African wild dogs, whose consistent movements across home ranges averaging hundreds of square kilometres makes them particularly difficult to track. More often than not, we stumble upon a pack of wild dogs by chance, their dark, Mickey Mouse-like ears suddenly appearing from behind a tuft of grass in an area they were absent from for weeks before.

Where predators share a preference for prey, there is bound to be competition. Interactions between different species are not uncommon in these expansive wilderness areas, but being in the right place at the right time to witness these interactions certainly is. By moving across such vast areas, wild dogs are able to reduce this competition with other animals like hyena, lion and leopard, but the threat is ever-present.

Our morning game drive began like any other, the coolness of the night still hanging in the air and an increasing array of bird sounds echoing around us. After half an hour, we had only been graced with a small herd of impala, feeding on some nearby bushes while ever-alert to the possibility of approaching danger. Suddenly, the call came in that a pack of wild dogs had been spotted at a nearby lodge waterhole, their presence given away by their unmistakable high-pitched whimpers.

Wild dogs are well-known for being very successful hunters, it seems not just among safari-goers but between local predators too. Hyena are equally famous for their opportunism and despite being capable hunters themselves, will readily switch to scavenging from other predators. It is therefore not uncommon to see them following in the path of wild dogs or lions, waiting patiently until they go hunting again.

We moved swiftly to the scene of the action and arrived to see a pack of fifteen wild dogs surrounded on all sides by six hungry hyena. Despite being less than half their size, the dogs were not ready to give up the impala they had hunted successfully mere moments before the hyena’s arrival. The pack immediately banded together, circling one young hyena whose unfortunate targeting provided his clan-mates with the opportunity to drag the kill away from the distracted dogs.

The hyena backed nervously into the waterhole, ears back and sharp teeth bared, snarling and lunging at the wild dogs as they came closer and closer. He was well outnumbered. One by one, the dogs nipped at the hyena’s vulnerable backside, supporting each other in a bid to teach the scavenger a valuable lesson. Four other pack members kept a watchful eye on the remaining hyena as they hastily removed the quarry from the noisy scene, the dogs’ hard-earned meal now lost. Eventually, the dogs lost interest in the lone, submissive hyena. Together, they trotted off into the bush in the direction of the impala herd still grazing nearby.

These interactions between species are a struggle for survival – the make or break of who gets to eat. Both are top predators competing in an unforgiving landscape, and this is a classic example of the battle that plays out over and over again in the African bush. The hyena have a size advantage but the wild dogs have strength in numbers; a near equal match that provides spectators with an intensity akin to watching a close game of tennis. To witness these interactions is something truly spectacular and certainly will not be forgotten by the guides and guests on safari that fateful morning. 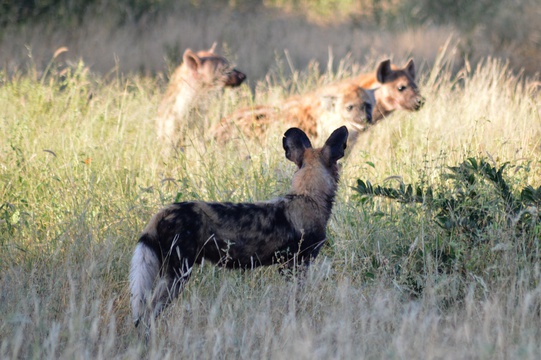 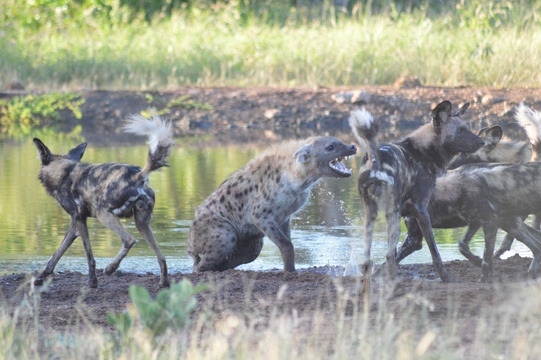 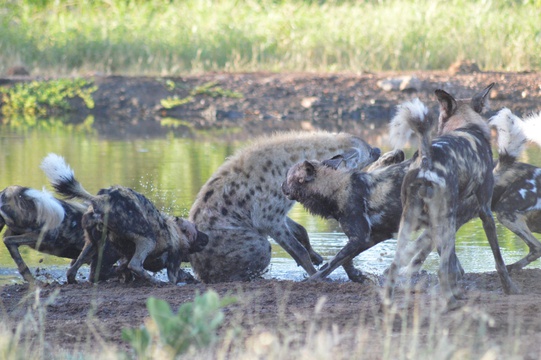 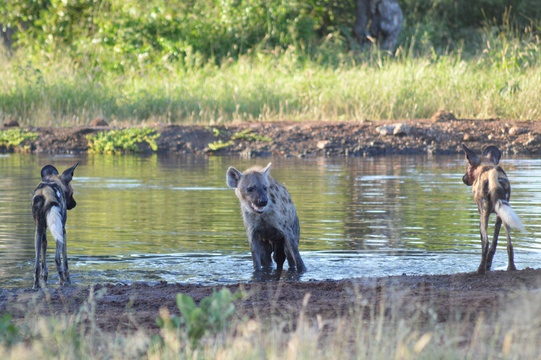 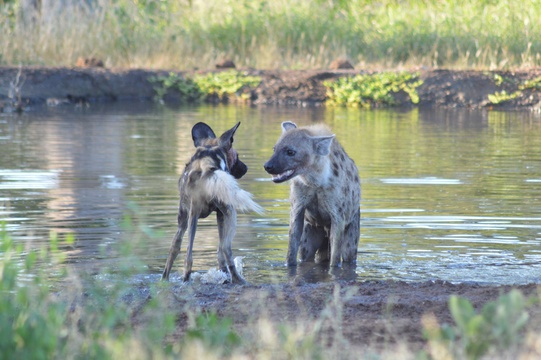 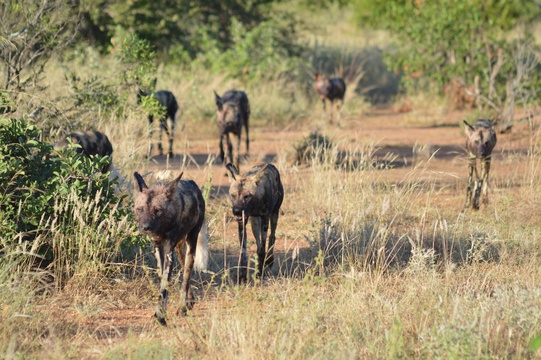