When the Safari Gods Deliver 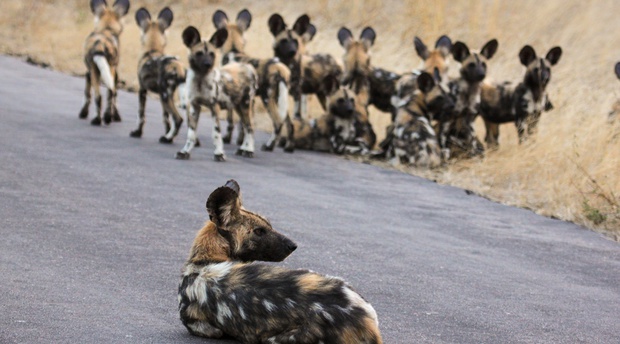 Constructing and sticking to a plan for a game drive has about as much chance of happening as finding a cheetah in the Klaserie: in other words, it’s a very rare occurrence. More often than not, some unexpected fresh tracks will appear, or a radio call will come in, that reroute your entire drive and the game plan you had in mind quickly goes out the window.

I had just bid goodbye to a wonderful American couple at the airport, off to enjoy the remainder of their honeymoon in Cape Town. Lucky for me, the return drive to the lodge provides as much opportunity to spot wildlife as the average safari, given that a large part of it involves traversing through the reserve itself. Shortly after entering the park gates, I noticed a cluster of parked cars in the distance and a feline figure slinking across the road. “Oh cool, a lion” I thought to myself, with a somewhat understated enthusiasm. I began slowing down, the black freckle-covered body of the animal becoming more apparent as I edged closer and closer. “Even cooler, a leopard!” My excitement grew as the opportunity to see this elusive predator quickly turned an otherwise mundane airport transfer into the average safari-goers dream drive. But there was something peculiar about the shape of this leopard… its body was slender with questionably pale colouration and the longest legs I’ve seen on any big cat. With eyes widening, I quickly realised the mistake I’d made in my premature assumptions: this wasn’t a leopard, it was a cheetah!

“Change of plan: A very special animal has been spotted!” I told my guests eagerly as I hustled them into the back of my game vehicle, “I saw three cheetahs crossing into the Klaserie on my way back from the airport - this is an incredibly rare opportunity for us!” The looks on my guests’ faces were somewhere on the spectrum between excitement and confusion as I sped off down the access road towards the last known location of the world’s fastest land mammals.

We waited patiently for our opportunity to join the high-profile sighting and admired an inquisitive family of dwarf mongoose while we did so. One by one, little fury heads popped up from the small holes in a nearby termite mound into which they had scattered at the sound of our approaching vehicle. As the group giggled at their erratic reappearances, we received the go-ahead to approach the cheetah and positioned ourselves on the outskirts of a nice, open area in which the three cats lay. It was a female and two males, assumed to be her two older cubs that were yet to disperse from her care. I attempted to explain to my guests just how truly remarkable this encounter was, given that cheetah typically prefer more open savanna grassland habitats over the dense shrubs and woodland that characterise the Klaserie.

The trio were full bellied from a recent impala kill that had unfortunately been commandeered by a large group of vultures that ambushed the carcass, forcing the cheetah to sacrifice the remains. We watched in awe as the female licked and groomed the bloodied face of one male while the other sat attentive for danger, a frenzy of camera shutters clicking like paparazzi at the wildlife celebrities. Vehicles had travelled far and wide for the opportunity to witness these uncommon predators, so after ten minutes we retreated from the sighting and began making our way back towards the access road. I now had another sighting in mind.

The Klaserie and Timbavati were blessed this year with a pack of African wild dogs that chose to relocate their den site to a property bordering the tarred access road. What this meant for August and September safari-goers was a greater-than-average likelihood of seeing the latest litter of big-eared, unbearably cute new arrivals as they rested close to the road during their family’s hunting bouts. Two of my guests, a retired Parisian couple, had been on safari a number of times in the past but were yet to see wild dogs, let alone their adorably playful offspring, so I decided to try my luck on our way back to the lodge.

With swift affirmation of the pups’ whereabouts, I turned onto the access road and didn’t have to drive far to spot the 15 pairs of Mickey-mouse-like ears bundled at the edge of the road, overlooked by a patient babysitter. The bulk of the adults had gone hunting to provide for the mass of hungry mouths that were now preoccupied, nipping at each other’s faces and tails. I turned to my guests with a big smile on my face, impressed by the calibre of unusual sightings I had been able to showcase to them within only two hours. The afternoon couldn’t get much better: seeing both cheetah and wild dog puppies in the same game drive coupled with the satisfaction of being the first guide to introduce this French couple to the endangered canines.

We stayed with the puppies until they disappeared into the bush in hot pursuit of their family members, who had swiftly and expertly brought down an impala nearby. At this point in the evening, the sun had just dipped below the horizon and a thick belt of cloud dissipated its last rays, igniting the sky with a soft, rosy glow. As we made our way back to the lodge, tracker Caswell pointed out an oddly shaped silhouette, highlighted by the backdrop of the setting sun. There, perched on the arching branches of a dead tree, was a Verreaux’s eagle owl proudly surveying the darkening landscape. Its identity was given away by two vertical ear tufts and characteristic charcoal black eyes that were just visible in the fading light. The whole vehicle fell silent as each person took a moment to appreciate the spectacle, admiring the impressive bird while simultaneously reminiscing on the portfolio of unique wildlife we had witnessed that afternoon. 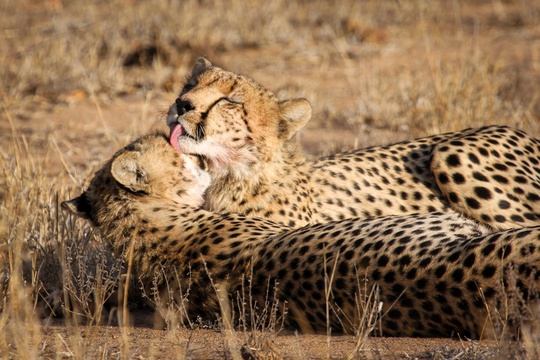 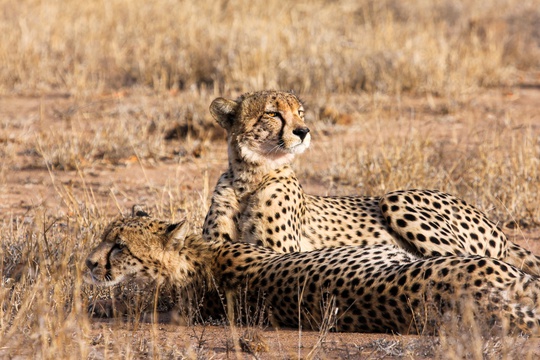 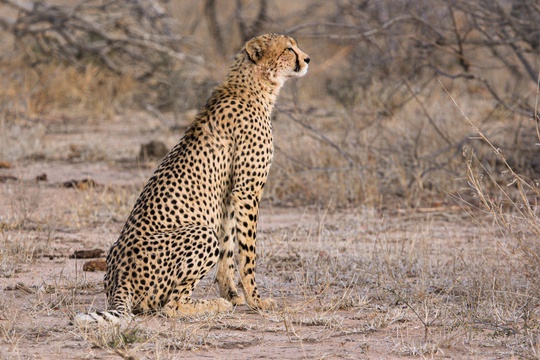 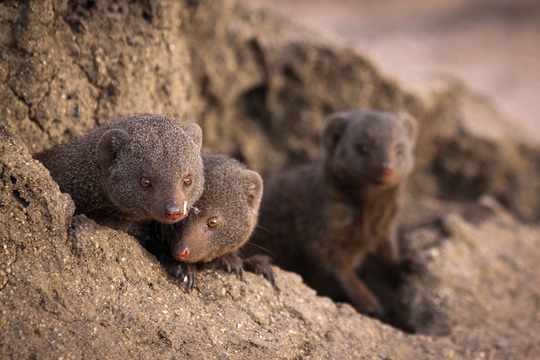 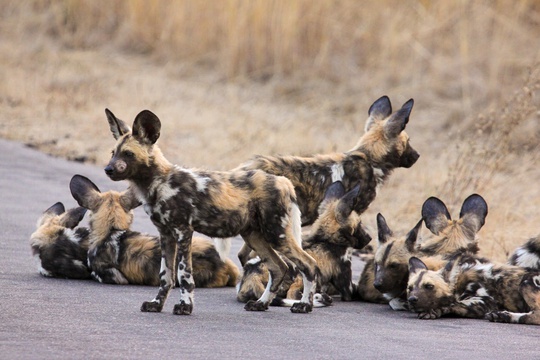 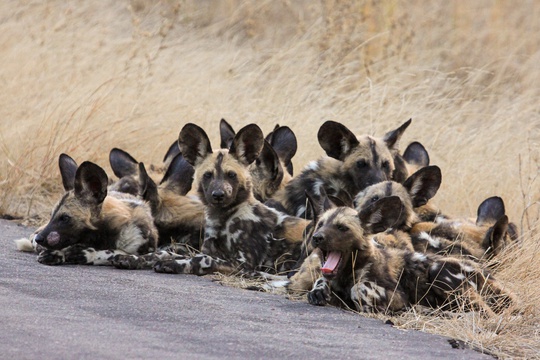 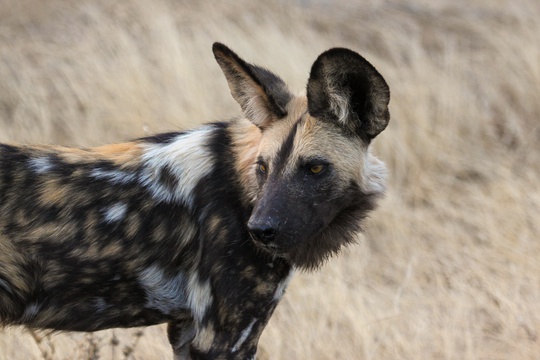 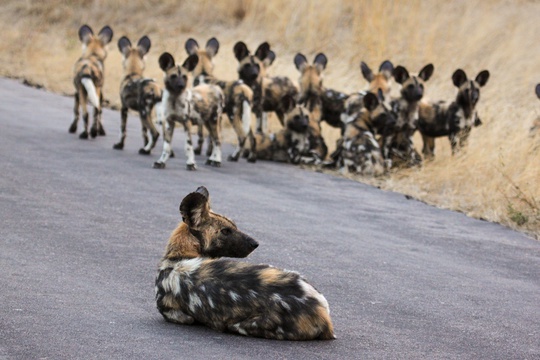 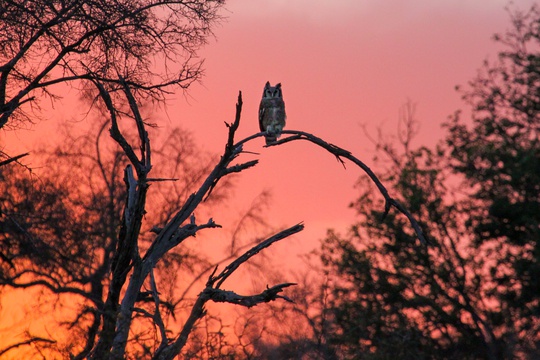