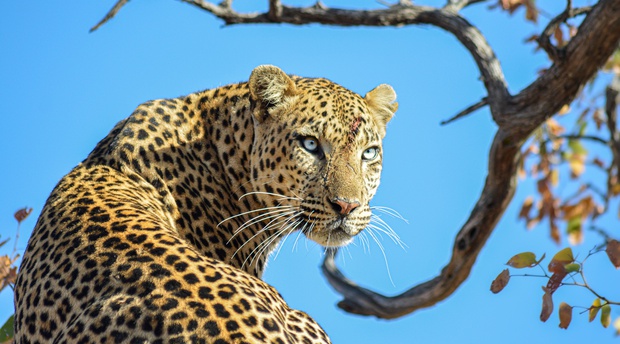 A leopard’s ability to navigate the steep trunks and twisted branches of trees with seeming ease is well-known but rarely witnessed.

As solitary hunters, leopards are vulnerable to opportunistic predators, such as hyenas, mobbing them in an attempt to steal their hard-earned kill. As such, these formidable predators have learnt to hoist their catch into the safety of a nearby tree; a cunning tactic for avoiding the insatiable appetites of their competition. Lightweight bodies, powerful forelimbs and sharp, protractile claws provide the necessary means for hauling the dead weight of their prey high into the canopy, just out of reach.

The location of this particular kill was given away by the fresh tracks of a large, male leopard crossing the road into a dense mopane thicket. With the onset of winter in the Lowveld, the falling leaves and thinning grass are making it progressively easy for guides and trackers to spot the out-of-place shapes concealed within the tree canopies and beneath bushes. Our guests of Klaserie Sands River Camp had been enjoying an otherwise peaceful game drive when the call came in that the leopard kill had been spotted. However, upon closer inspection, the predator was nowhere to be seen and the warthog, whose day had taken an unexpected turn for the worse, now lay motionless amidst the mopane leaves.

We were sure the culprit would return to finish what was left of the carcass. Given the unpredictable nature of the bush, this leopard would not leave behind a perfectly good meal and had most likely descended the tree in search of a cooler place to sleep out the hottest part of the day. It is never easy to see the remains of a creature whose day had begun like any other, perhaps emerging from its burrow in search of food at sunrise. However, the African bush is a formidable place and only the fittest, most cunning and well-adapted will survive out here. Unfortunately for this warthog, it had not succeeded in outdoing the hunter on this occasion.

We returned the following morning to inspect the area. As we pulled in, we were delighted to see the huge, rosetted figure of our territorial male leopard perched uncomfortably on the branches where the kill had previously laid. All that remained now were a couple of bones; enough of a prize for the prying eyes of five, opportunistic hyena who now lay patiently at the base of the tree, hoping for a morsel to fall. The leopard peered down at them with contempt, his full belly hanging low between his back legs, clearly impatient to descend to a cooler, more comfortable location to rest.

Eventually, the remaining hyena retreated to the shade of some nearby trees and the leopard took his opportunity to escape. Slowly and carefully, he began to descend headfirst down the vertical trunk, his claws anchoring his bulk to the tree. Halfway down, he noticed the hyena bursting back onto the scene. In a swift and skilful display of incredible strength, the leopard swung his torso 180 degrees so that his back legs were now below him and pushed himself back up into the canopy, leaving both guide and guests in awe of his unrivalled acrobatic ability!

Back in the relative safety of the branches, the cat let out a chilling grumble, noticeably unimpressed by the hyenas unwelcome attempts to mob him. Once again, he found himself perched on the mopane’s extremities four metres above the ground in the heat of the rising sun. He had no choice: he was going to have to wait this one out. Hot and panting, the leopard shuffled to get comfortable and eventually managed to balance his heavy belly between two branches where he spent the following hours waiting for his competition to lose patience. A fascinating reminder that even Africa’s most formidable hunters don’t always get their way! 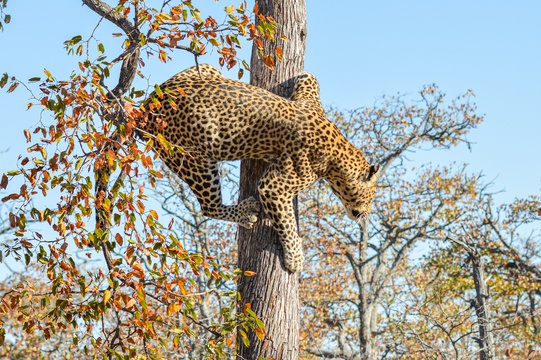 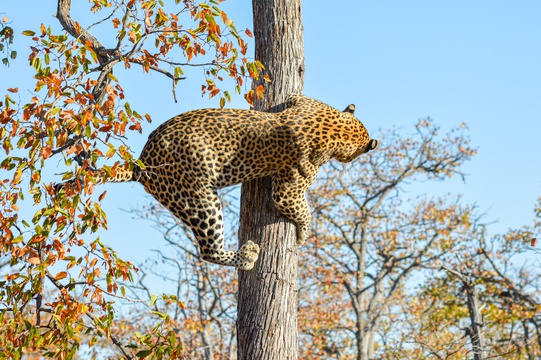 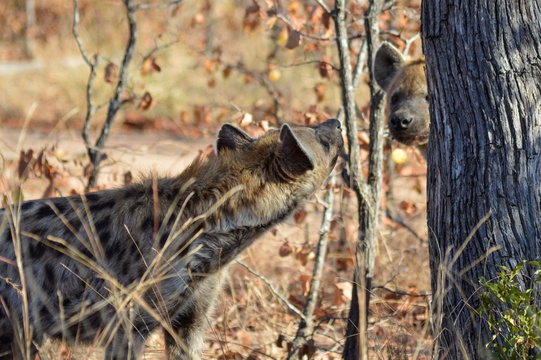 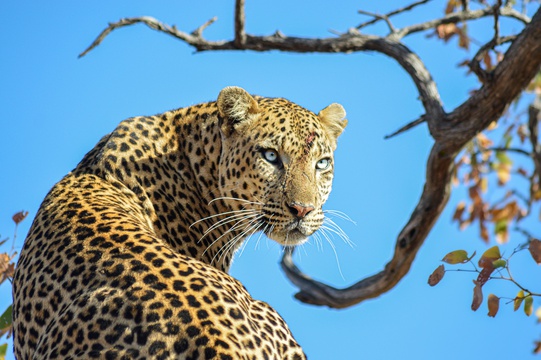 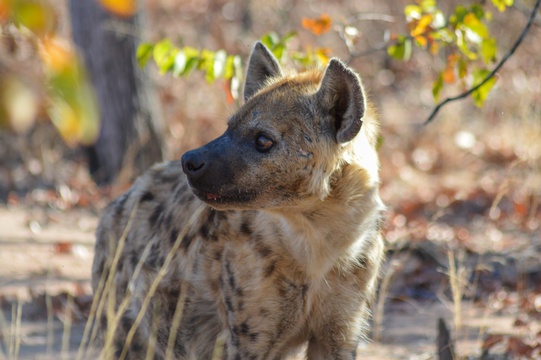