Focus on Research: An interview with Kyle-Mark Middleton of the Ground Hornbill Project 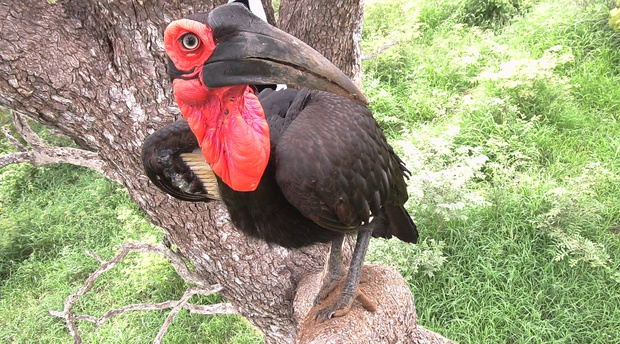 Over the years, Klaserie Sands has built strong partnerships with a number of local researchers whose dedicated fieldwork is contributing to our ever-expanding knowledge of the animals we see on safari.

One of these researchers is Kyle-Mark Middleton, who spearheads the Ground Hornbill Project in the Klaserie and surrounding reserves. Kyle visited Klaserie Sands last year to do a special educational talk for our guests and give them the opportunity to learn more about his fascinating discoveries first-hand.

Our guides have been contributing sightings updates to the Project's database for some time and love sharing his latest and greatest findings. We caught up with him recently for a quick Q&A to learn more about the projects intiatives and this charismatic bird.

Tell us a little bit about yourself… Where are you from? How did you get into research?

I spent the early years of my life in Johannesburg until moving into the Klaserie Private Nature Reserve (KPNR) when I was 17. I had always possessed a passion for the outdoors and the move to the bush led me to pursue a career in anything that would involve me in nature. 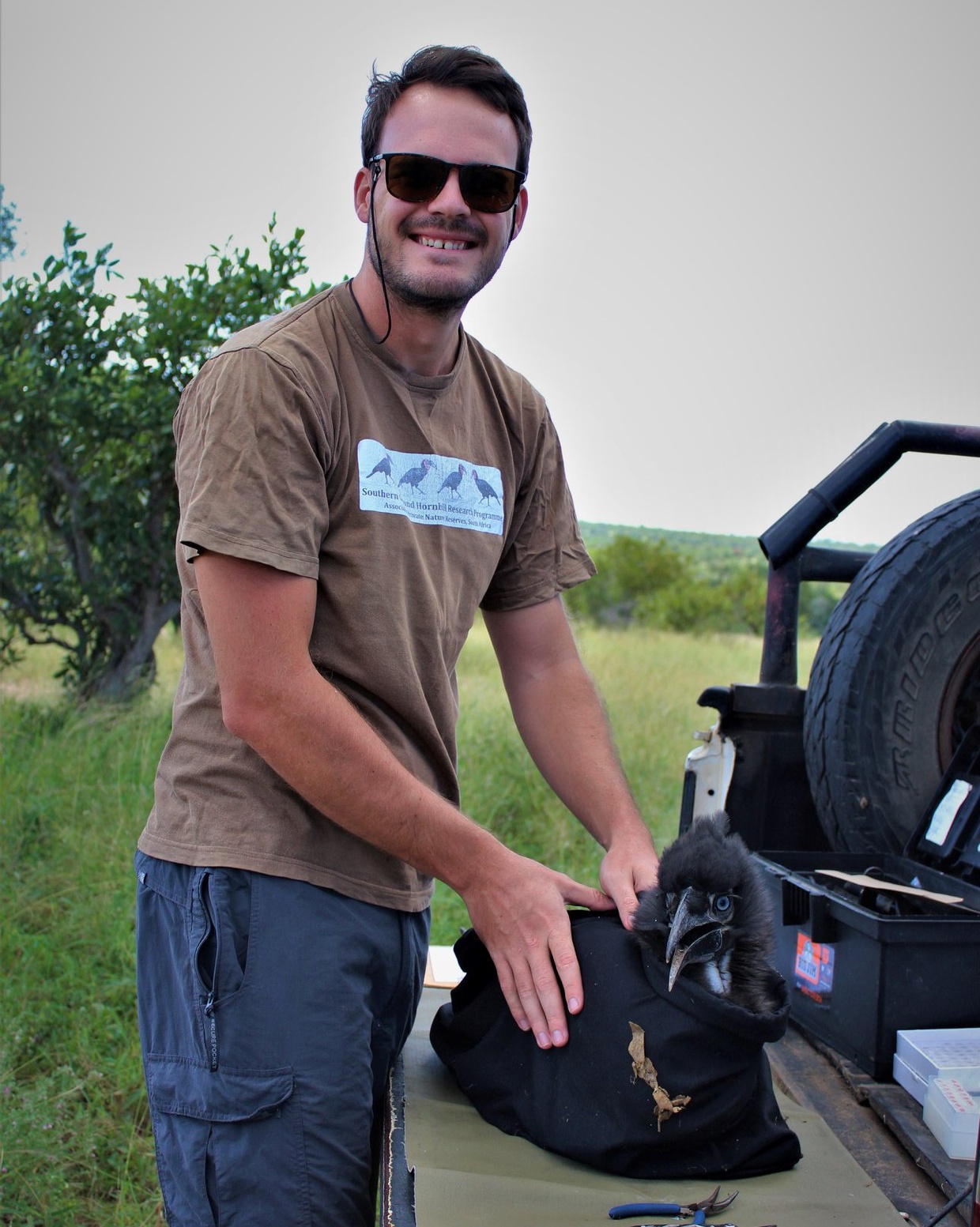 I went on to complete my BSc honours degree in environmental analysis and management at the University of Pretoria in 2014. Following this degree, I spent the next couple of years working in KPNR where my passion continued to grow.

It was during this time that I was introduced to the FitzPatrick Institute of African Ornithology’s southern ground-hornbill project and knew that I wanted to be part of it. Luckily for me, the timing was perfect and I was able to fill the vacancy that had recently opened.

I have now worked on the project for 5 years and am in the back-end stages of my PhD. My research on the ground hornbills investigates how different group members contribute towards vital group behaviours and how climate might affect this.

Where, when and how did the Ground Hornbill Project start?

We are currently celebrating the two-decade mark of the project (since it began in 2000), all of which has occurred within the APNR (Klaserie, Timbavati, Balule, Umbabat and more recently Thornybush).

It began with the FitzPatrick Institute sending students to investigate the habitat use and reproductive success of these prehistoric birds. At the time, there was little information on the them. With birds living in small groups (2-12 individuals), each occupying extremely large territories (approx. 100 km2), acquiring any kind of information on them is extremely difficult. Luckily though, the APNR has provided the perfect platform and has been unbelievably accommodating, resulting in a large proportion of scientific literature on the species.

Although it began as a study of the worlds largest cooperatively breeding bird, there has always been a strong conservation focus. Activities such as installing artificial nests and the harvesting of redundant second-hatched nestlings have been hugely successful. 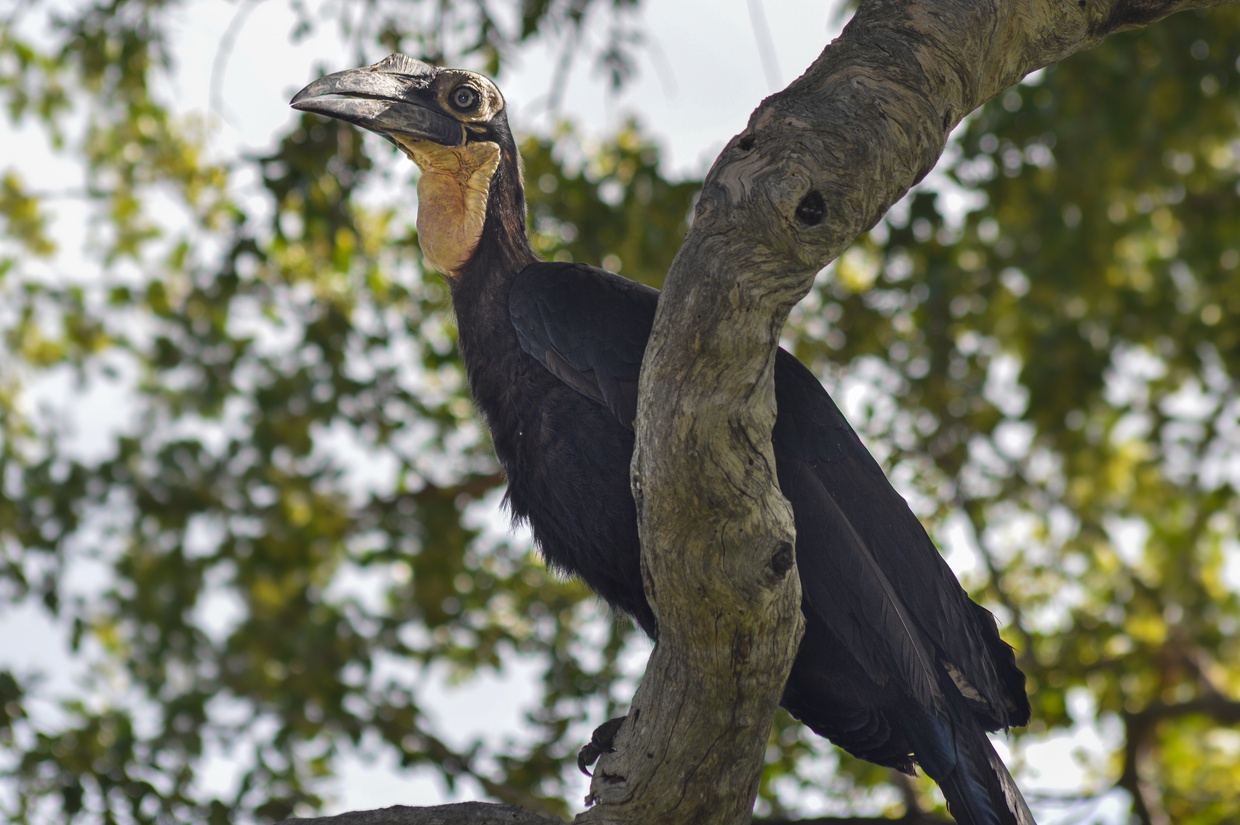 Why is the Ground Hornbill so endangered?

Unfortunately, as with a lot of the endangered animals throughout the world, humans are largely to blame. The species within South Africa has seen a 70% decrease in numbers and range within the last century. Reasons for this include: 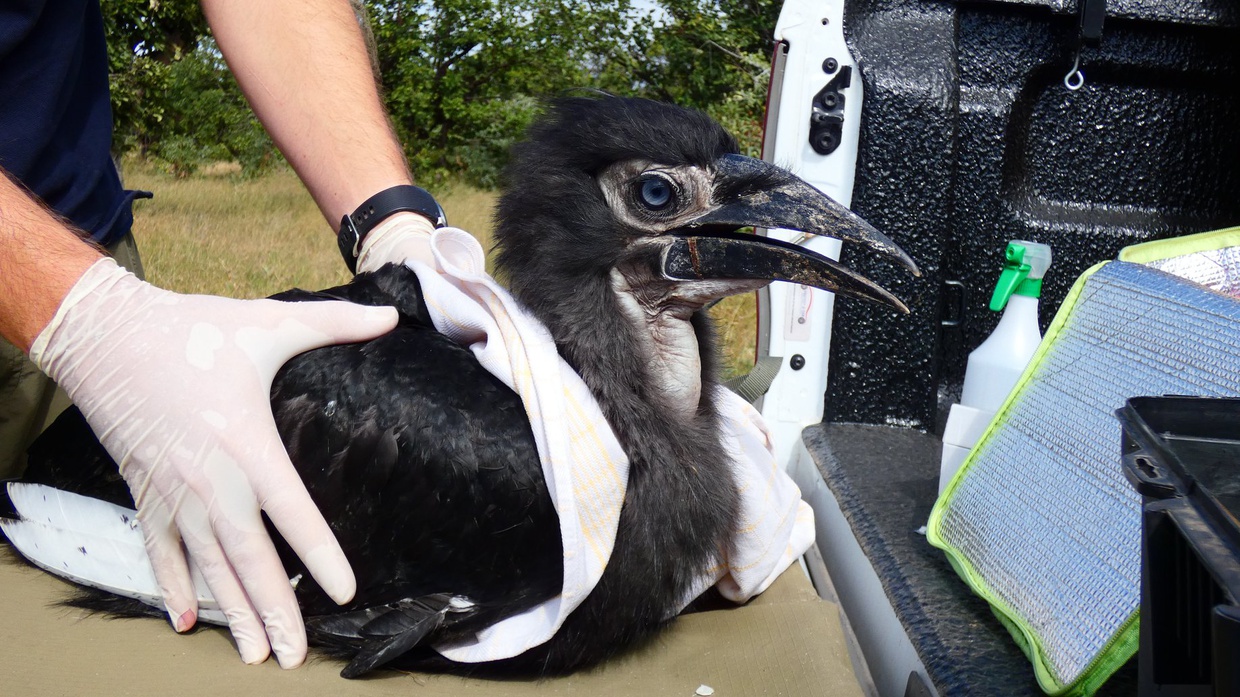 We see you recently acquired some swanky new nest boxes! What results or success have you seen with this initiative?

We did indeed! The project has been installing artificial nests for the entirety of its history and it has seen huge successes. Nesting sites within the area are a limiting factor for the birds and the artificial nests have provided the birds with the opportunity to breed. They breed extremely slowly in the wild with each group only able to produce a single chick every few years. Luckily with the nest boxes, the reproductive rate within the area has increased drastically and the number of groups within the APNR has more than doubled.

The latest nests which have been installed are made specifically for the ground hornbills. We are constantly testing out new nest designs to find the perfect one. It sounds simple but can be quite tricky looking for something that meets all the criteria and is cost efficient at the same time!

Ground-hornbills use their large beaks as a battering ram when testing out new nests and so the designs need to be extremely sturdy. If there is any weakness in the nest, they will exploit it. The nests also need to insulate the birds from the extreme temperatures which the area is subject to. We will eventually find the ideal design that will allow us to install a nest that will be able to withstand the birds abrasive habits, be insulated enough to optimise breeding, and be able to stand the test of time and last decades rather than years.

The past season saw one group taking to the new style of nests very quickly and have successfully reared and fledged a chick which is very encouraging. 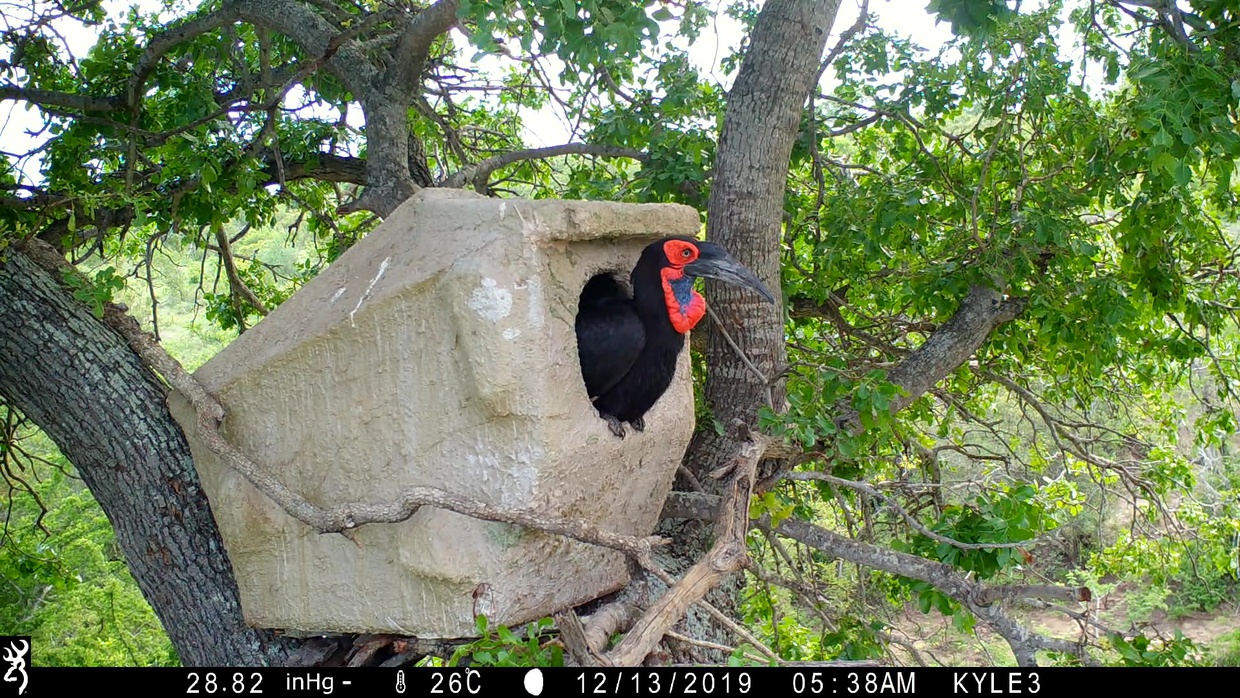 You dedicate many hours to being out in the bush watching these amazing birds. Do you ever get disturbed by other wildlife?

Daily! It is impossible to spend so much time in the bush and not be disturbed by the wildlife. Amongst the rush, we will often make time to just sit and enjoy the raw beauty of nature, whether it be just admiring a rank of impala or watching a herd of elephants do their thing.

One of the more exciting encounters we had was this season though. There had been some rain the night before and so all the rivers were flowing. To get to the nest, we had to walk through the shallow river. This was already exciting for us since it does not happen every day. Once we were across, we were walking through the long grass to the nest and when we got about 15m from the tree, we saw that there was a leopard just above the nest. The leopard was not happy at all and it leapt out of the tree from the very top, growled at us, and ran away.

It was then that we noticed the pride of lions also underneath the tree. Somehow, we had managed to walk into the middle of an encounter between a leopard and lions! Luckily for us, the lions were being their usual lazy selves and did not show much interest in us. We slowly backed up and made our way back through the river and back to the car. It was definitely something to get the blood pumping, but the positive is that the chick within the nest was untouched and recently fledged. 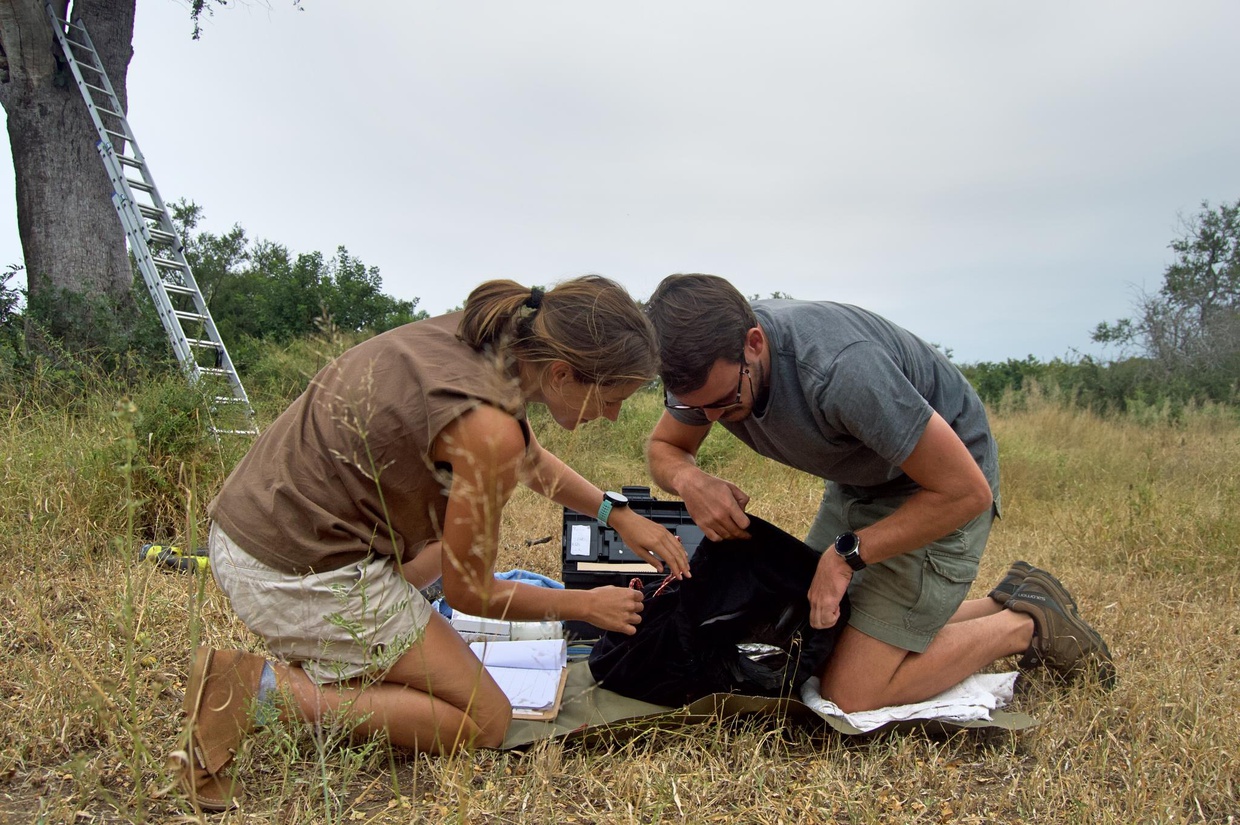 We often hear our local family of Ground Hornbills calling in the early morning from the camp deck as we enjoy our coffee. What is the purpose of this morning song?

As I mentioned before, ground-hornbills occupy extremely large territories of about 100 square kilometres and occur in small groups of 2-12 birds. These territories are therefore far too large for the birds to actively defend and so they use their deep booming vocalisations as a means of advertisement.

Our latest research has shown that each group produces their own signature call which we think the birds use to recognise each other and potential intruders. Research on other territorial birds has shown that birds respond more aggressively to birds which they do not recognise. We are in the process of testing this with the ground-hornbills. This morning chorus also plays a role in group adhesion and maintaining bonds between the individuals. 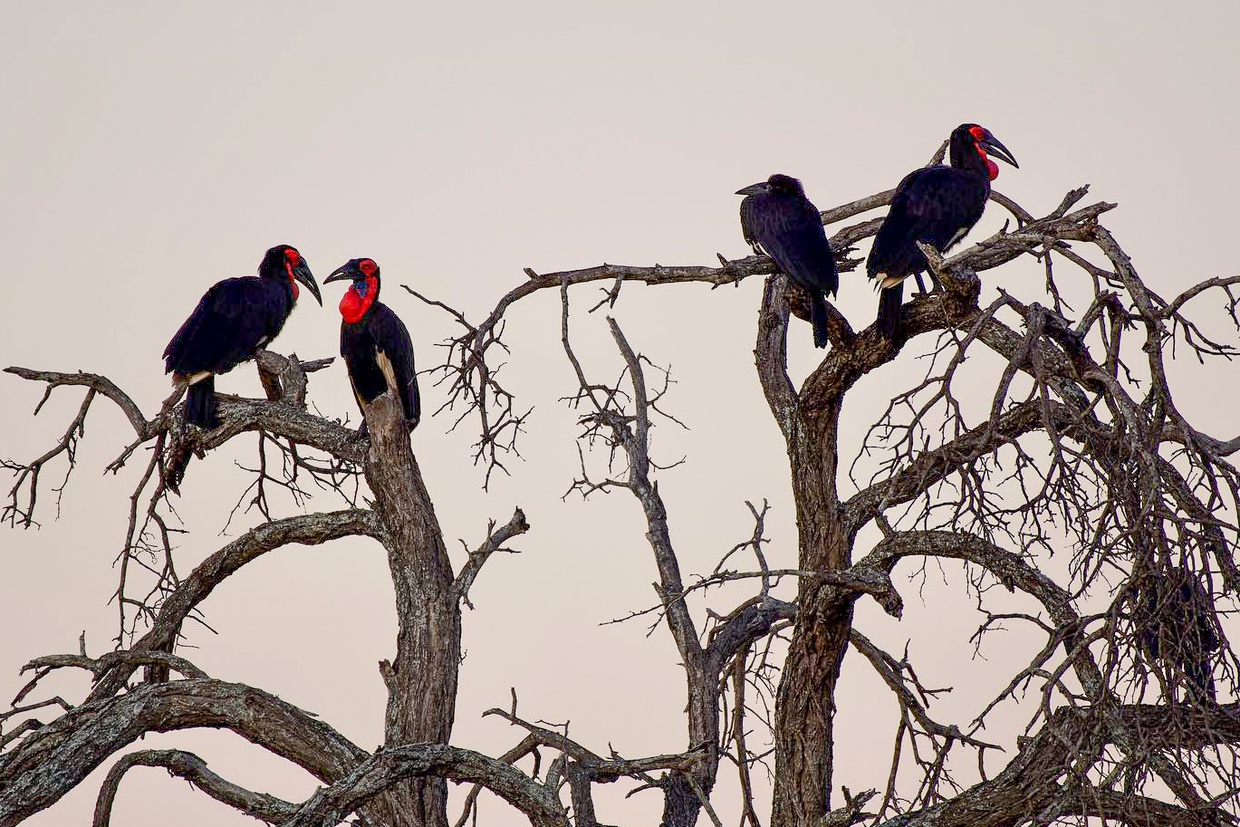 Your camera trap recently filmed a leopard predating a Ground Hornbill nest. Does this happen often?

Camera traps are some of the most useful tools for analysing these birds, providing us with an insight into their private lives. The footage of the leopard is the perfect example of that. We have always just assumed that leopards are responsible for chick mortalities, however, we have never been able to say with absolute certainty. This footage is the first that we know of which proves this. As to how often it happens, we do not know. Hopefully in the years to come, we will be able to get a better idea. 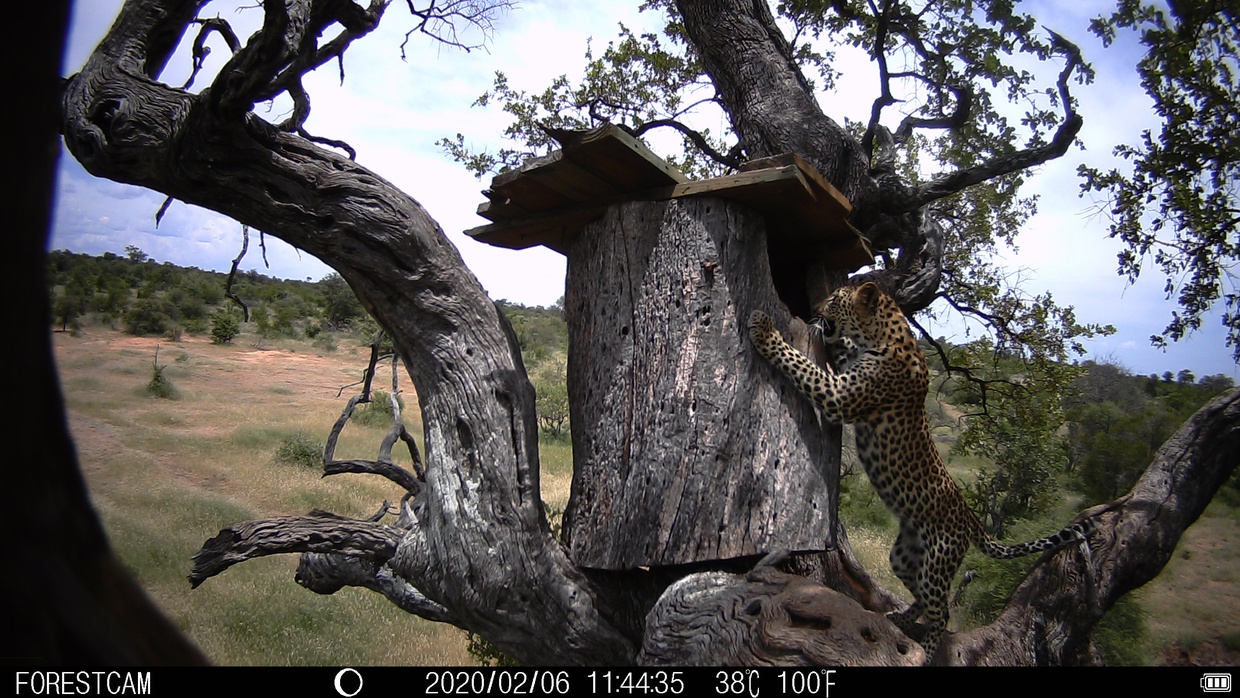 What other interesting things have your hidden cameras recorded?

The cameras have recorded some amazing stuff. In terms of ground-hornbills, it has been amazing to hear the array of vocalisations which they can produce, as well as see the different personalities of the individuals. Other things which we have recorded at the nests are different owl species, particularly barn owls who seem to be checking out the nests for their own breeding, patiently waiting for the ground hornbill chick to leave. We have also caught genets, baboons and snakes at the nests.

In your opinion, what makes the Southern Ground Hornbill so fascinating?

It is difficult to pin-point one single thing which fascinates me about them. The more I research them, the more interesting they get and the more I realise how complex and intelligent they are. From their prehistoric appearance, to the way that each individual within the groups contributes in different ways to group behaviours, they are just interesting all round! 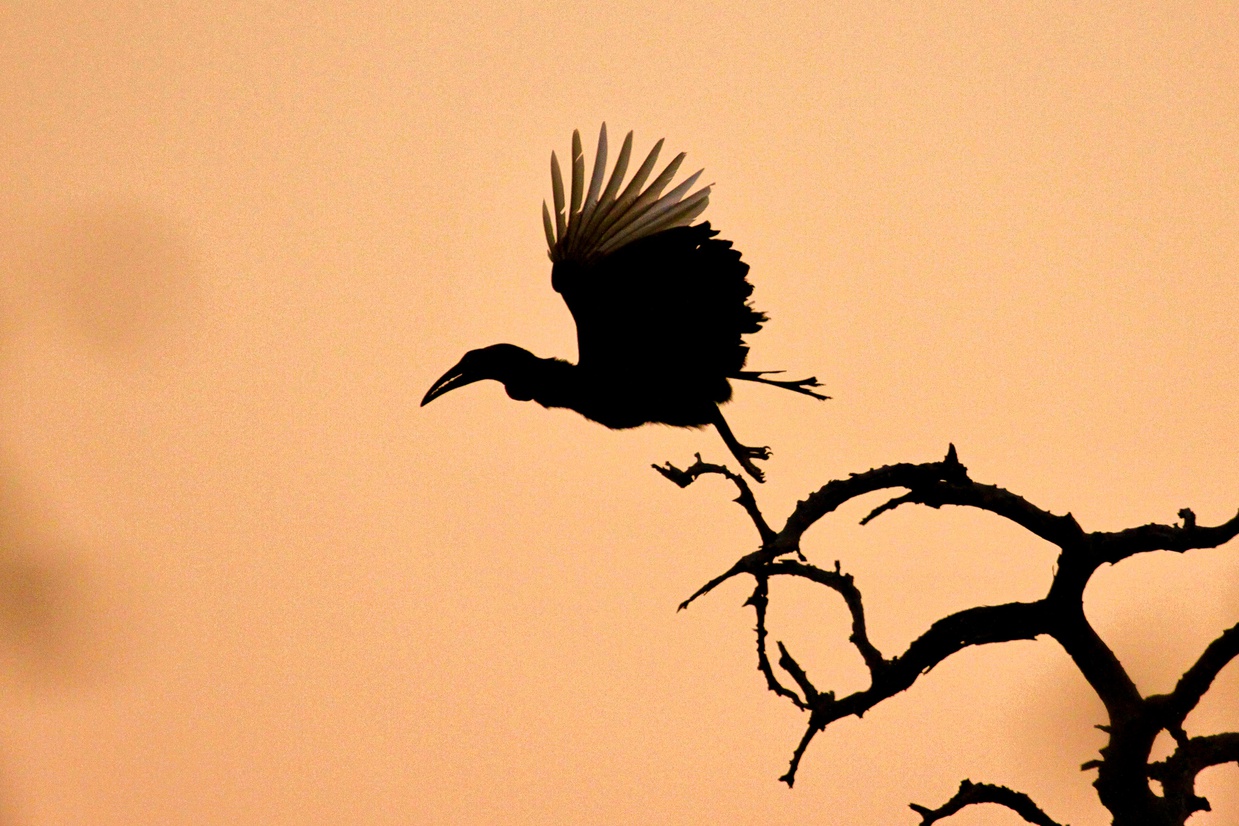