Head of the Klaserie 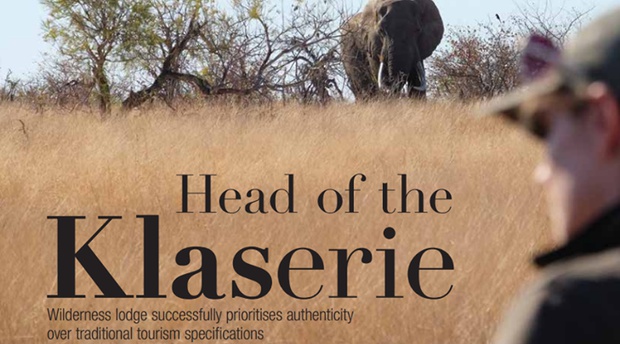 This review of Klaserie Sands River Camp by Skyways Magazine editor, Bruce Dennill, has perfectly captured the unique blend of beauty, passion and gentleness so intrinsic to our brand.

The approach to Hoedspruit’s Eastgate Airport makes it look as though you’re landing right in the middle of a sea of endless savannah. Essentially, you are. There are small settlements in the vicinity, but a much more common sight is the entrance gate to a game reserve – there’s one right opposite the exit to the airport’s parking lot.

Families, friends, drivers and guides wait under the shade of fever trees in the tiny airport’s central courtyard, and from the steps of the plane to the vehicle that will take you to the game lodge you’re heading to is not more than a couple of hundred metres, meaning arrival is more or less stress free – the best way to start a bush break.

Return to the wild

Discreet signs betray the presence of a number of small, exclusive establishments, but the overwhelming sense is of being in a remote wilderness area – an increasingly rare experience.

Klaserie Sands River Camp slowly emerges from the treeline along a curve on a dry riverbed. In 2012, the property situated there was devastated by ‘once-in-a-century’ floods. Louis and Lee-Ann Rautenbach’s construction company won a tender to rebuild it, and being on site led to the couple falling in love with the area and convincing the landowner to allow them to develop a boutique game lodge of their own in that location.

It’s a beautiful place – elegant, complementary décor; private rooms that overlook the riverbed or the waterhole across from the plunge pool on the shaded main deck; a petite gift shop; all anchored by large jackalberry and marula trees. To some degree, many venues can match these superficial details. But it’s soon evident that there is another layer to this place. All the staff have a tangible passion for what they do. Again, that’s expected, or at least hoped for, in any appealing destination. But another facet they share is gentleness, and the combination of those two qualities is uncommon – and enchanting.

This is part of a greater philosophy that is as unanticipated as it is effective. There is no star rating sign at the main lodge door, and Louis is cheerfully unapologetic about its absence.

“We don’t want that sort of sign here,” he says. “We want to build a reputation that our guests share with others, based on the authenticity of their experience here.”

If you are a guest who’s been on site for more than a couple of hours and has met a few of the staff, this immediately resonates. It’s not a very corporate view, embracing the risk that comes along with emotions rather than tick-boxes on a clipboard, and as you watch an elephant potter over to the waterhole to drink and splash itself with mud, or watch the rustling leaves in a bush below the deck morph into a foraging hyena, you want this perspective to succeed. Begone, rat race competitiveness. Welcome, shared appreciation of nature and its complexities.

If you don’t feel equipped to contribute meaningfully to such a mindset when you arrive, you certainly will by the time you leave. Lead safari guide Elly is an Australian-English zoologist with a formidable breadth of knowledge and a heart-on-her-sleeve devotion to the landscape she traverses in her Land Cruiser, and all the creatures that inhabit it. A game drive – part of your Klaserie Sands experience every early morning and late afternoon and evening, should you be interested – with Elly involves hearing all the usual information that any reasonably good ranger would have at their fingertips, as well as a massive amount of information about everything from tiny red-billed quelea nests (tiny and intricate; like natural Christmas baubles on thorn trees) to the best way to photographically capture the arcing spray created by a drinking giraffe as it lifts its head from the surface of a waterhole. And if you’re a South African, she has another refreshing perspective, having come to this country because she felt she was unable to find a job she would love in Australia. That fabled grass is greener somewhere…

In Klaserie, each lodge and its guide and guests have access to specific concessions in terms of where they are allowed to drive and view wildlife. Some of these overlap, but the result is that traffic on the routes you’re likely to follow during your stay is always light, and there’ll be time to take in your surroundings in peace and quiet (bar the birdsong and the occasional roar of something toothier).

Our first drive turns out to be a bar-setter. We start out heading to a dam to see some hippos, as they are the remaining species on some departing guests’ wish list, and while watching them frolic – they did; they can be playful, apparently – are fortunate enough to see the aforementioned pair of giraffe doing their yoga moves in order to lower their heads all the way down to sipping level.

Sundowners are enjoyed overlooking a broad horseshoe bend in the Klaserie River, with the escarpment created by the northern reaches of the Drakensberg in the distance, fringed by a spectacular sunset.

This feels like a good end to the day. The drive back in the dark begins, as usual, as something that feels like a pleasant afterthought – a return commute with the possibility of a mysterious bump in the night. But a combination of factors – animals that feel comfortable because they’re not overly stressed by onlookers, expert staff (Elly and eagle-eyed tracker Morris) and pure luck – means that our adventure is not nearly over.

First a couple of hyena, then a chameleon (20m off the road; how Morris sees it is beyond all of us in the back). A little later a genet, low to the ground; then a tiny bushbaby, high up in the branches of a tree. Scrub hares regularly wander across the road, scampering off into the gloom, and bats and flocks of swifts are an effective mosquito screen above our heads. And then, just as we are about to cross the riverbed across from the lodge, a shuffle in some bushes to one side – two porcupines! One of them seems to attempt to hide behind a bit of scrub, oblivious to the fact that its huge fan of quills is giving away its location before it decides to get further out of range.

This pilot episode suggests Klaserie is going to be a superb series. We celebrate auspicious beginnings with drinks around a bonfire and then a meal of commensurate quality, created by chef Steven, whose infectious enthusiasm and flair for the dramatic – his menu presentation allows for plenty of pauses for applause – is outdone only by his easy hospitality and outstanding culinary skills. You’ll eat far more than you need to, and you won’t feel even slightly guilty.

The aftermath of a luxurious dinner is spent in further discussion with Louis and Lee-Ann, coming to better understand their vision for this camp and their new venture, Klaserie Sands Safari Trails, an off-the-grid tented camp focusing on walking rather than driving through the bush and a more direct connection with nature.

We’re interrupted by a loud thump.

“Honey badger,” says Louis. Turns out the creature shimmies up and over a fence post to grab a snack from the service area, if something is available. “We have one rule: don’t corner him.”

It’s a good rule – they’re formidable animals with incredible strength, powerful jaws and long, sharp claws. But we have an early start; another adventure to begin at first light. When he backs down the corner pole, his eyes on us, we respectfully wait until he settles on a warm geyser cover across the courtyard, then get into our rooms and recover from the excitement. 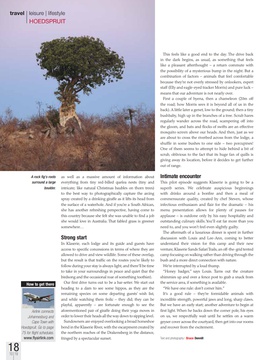 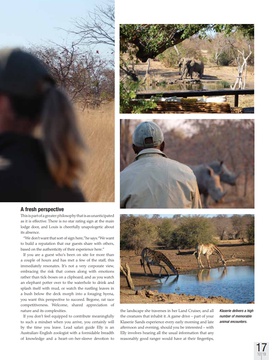 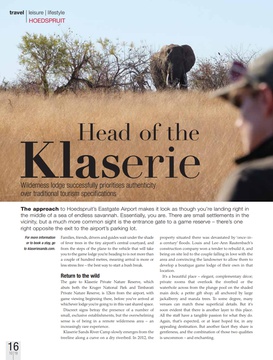