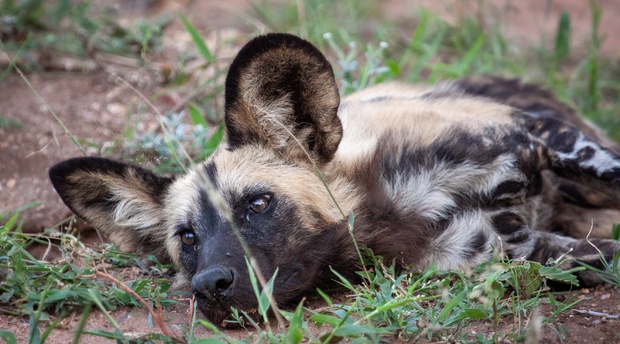 We are excited to introduce our new "Focus" segment: a series of interesting videos and articles in which our guides explore new topics each week and open you up to the wonders of the African wilderness.

Whether your interest is birds, animals or plants, our guiding team are guaranteed to boggle your mind with some of their favourite wild facts about the things they see on safari each day.

We can't think of a better animal to kick off the Focus series than one of our 'safari royalty'- the African wild dog!

Ask any field guide what their favourite animal is and I can guarantee you that a large majority will say it's the African wild dog. Although not one of the better-known 'Big Five' animals, one can't help but fall in love with these charismatic canines the first time you see them. Whether it's their giant, Mickey Mouse-like ears, their propensity to care for those who are sick or injured, or their unbelievable pack-hunting ability, the African wild dog certainly proves to be a memorable icon of the Kruger wilderness.

I feared it may be impossible to narrow down my fascination with these animals to just seven, interesting facts, but I hope by the end you will be as enamoured of the African wild dogs as I am.

1. What is an African wild dog?

The wild dog goes by many common names which you may recognise, including 'painted wolves' and 'Cape hunting dogs.' One name that does not change, however, is their scientific name, Lycaon pictus. It may not roll off the tongue with as much ease as the others, but this name actually says a lot about the animal itself.

When we break it down, Lycaon is Greek in origin and derived from the word lykaios, meaning “wolf-like”. On the other hand, pictus comes from the Latin word for “painted”, which refers to the mottled patterns of black, tan and white colours in the dog's fur. These markings are unique to each individual and can be used by researchers to identify each member of a pack. You may notice, however, that all wild dogs tend to share the same facial markings and white tip on their tail. 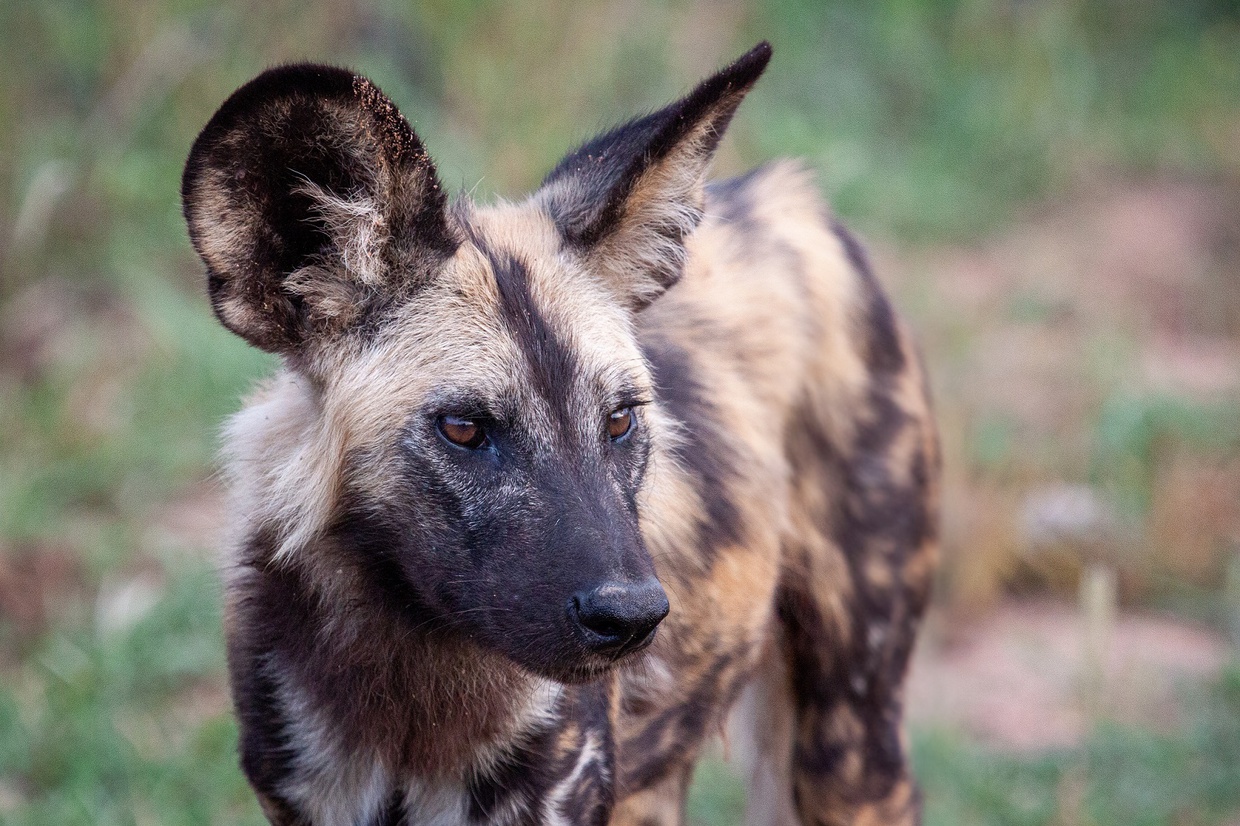 2. Is the wild dog just a feral version of the domestic dog?

We often get asked if the African wild dog came from a feral domestic dog that found its way into the wild, adapted and began breeding, much like the dingoes that were introduced to Australia. The answer is no: the African wild dog has, and always will be, truly "wild".

Jackals were the first to split off from their wolf-like ancestor, closely followed by the African wild dog, which has since been evolving a suite of unique adaptions over the past 1.7 million years. Domestic dogs, however, only came about more "recently", having diverged from grey wolves about 31,000 years ago.

Among an array of differences between the wild dogs and domestic dogs, the most interesting is the fact that domestic dogs still possess five digits on their feet, whereas the wild dog has lost one of the digits on its front feet. This is believed to increase its stride length and speed when hunting over long distances, which brings me to my next fact... 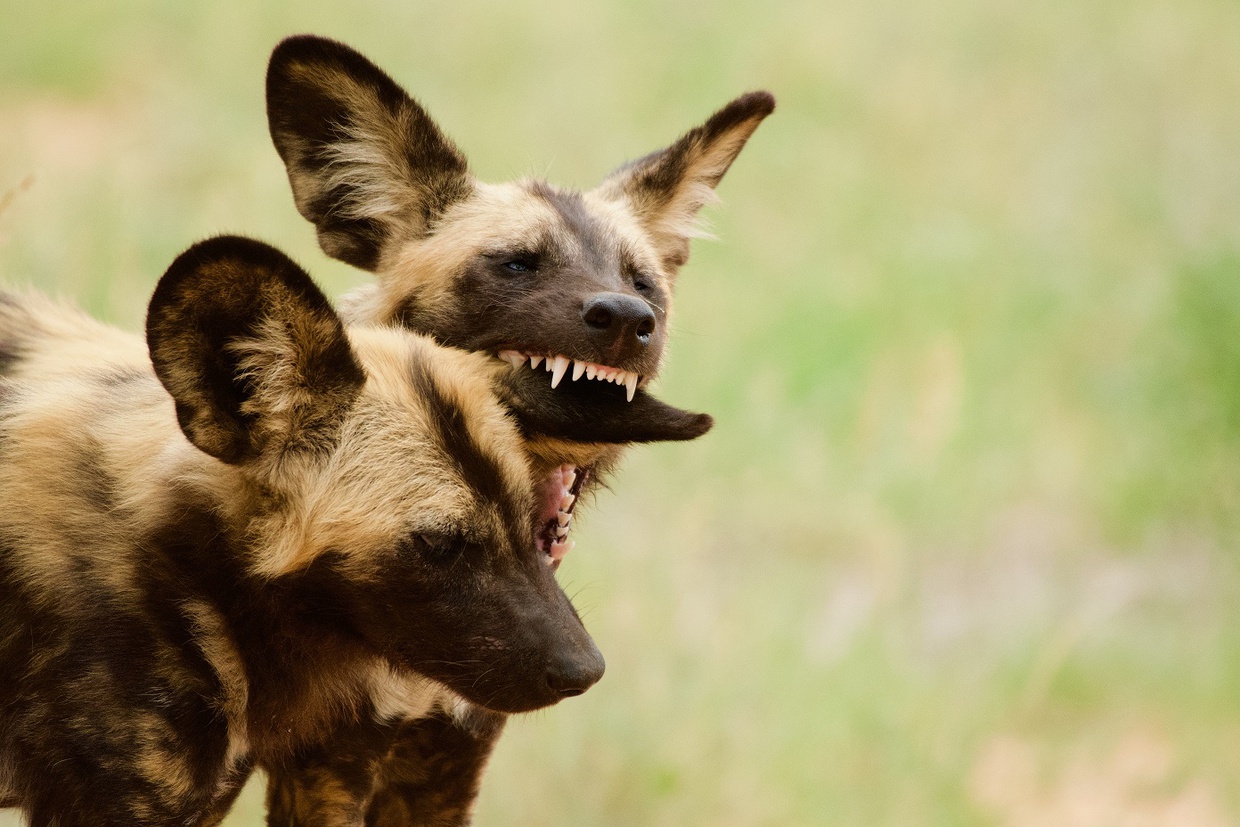 3. They are formidable pack hunters with an unbelievable success rate

I could easily write an entire article focused purely on wild dog hunting tactics, but what I find most admirable is the amazing teamwork that these predators employ when it comes to hunting. While their success rate will depend on the size of the pack, prey and habitat type, wild dogs make a successful kill about 70-80% of the time. To put that in perspective, lions only make a successful kill about 30% of the time and leopards about 40%. The dogs primarily focus their efforts on small- to medium-sized prey such as impala, kudu and wildebeest, and will vary their tactics depending on their target.

In the case of wildebeest, the pack will often rush towards the herd in an attempt to panic them, allowing the dogs to isolate a vulnerable individual. With smaller antelope like impala, the pack member that is leading the hunt will choose a certain individual to target and the chase begins. Built for endurance, wild dogs have incredible stamina and are capable of maintaining a 66 km/hour (41 mph) pursuit for up to an hour, although the average chase will only go on for about 2km. 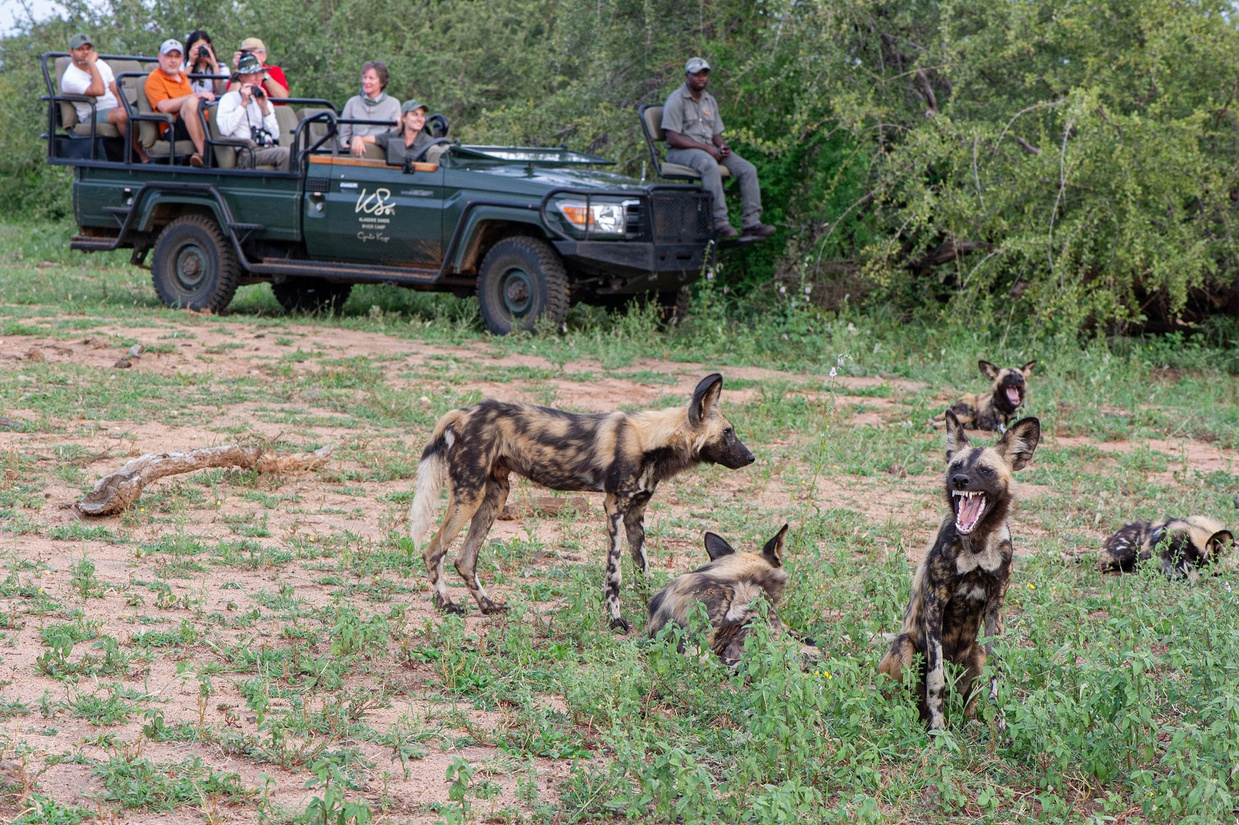 4. They are true nurturers and carers

Wild dogs have a fascinating social structure with far greater levels of altruism than in many other predators. Like other social animals, there is a strict pack hierarchy dominated by the alpha female who is the only one to breed (less dominant females have been known to have pups but they often don't survive to adulthood). When the pups are first born they are kept in a den, usually an abandoned burrow in a termite mound, and are too young to keep up with the pack as they hunt. As such, pack members will feed and then return to the den to regurgitate food for the hungry pups and their mother or babysitter.

Sick or injured dogs are also provisioned for by their family members and, if unable to keep up with the speed of the hunt, collected by a pack member and led to the site of the kill. I have even witnessed a large wild dog pack caring for one of their puppies that had a severely broken leg. Its siblings would smell and lick the wound clean and there was always one adult hanging back with the injured pup as it slowly limped after the pack, determined not to leave it behind. At one point, two adults positioned themselves on either side of the puppy in what appeared to be an attempt to support it as it walked. 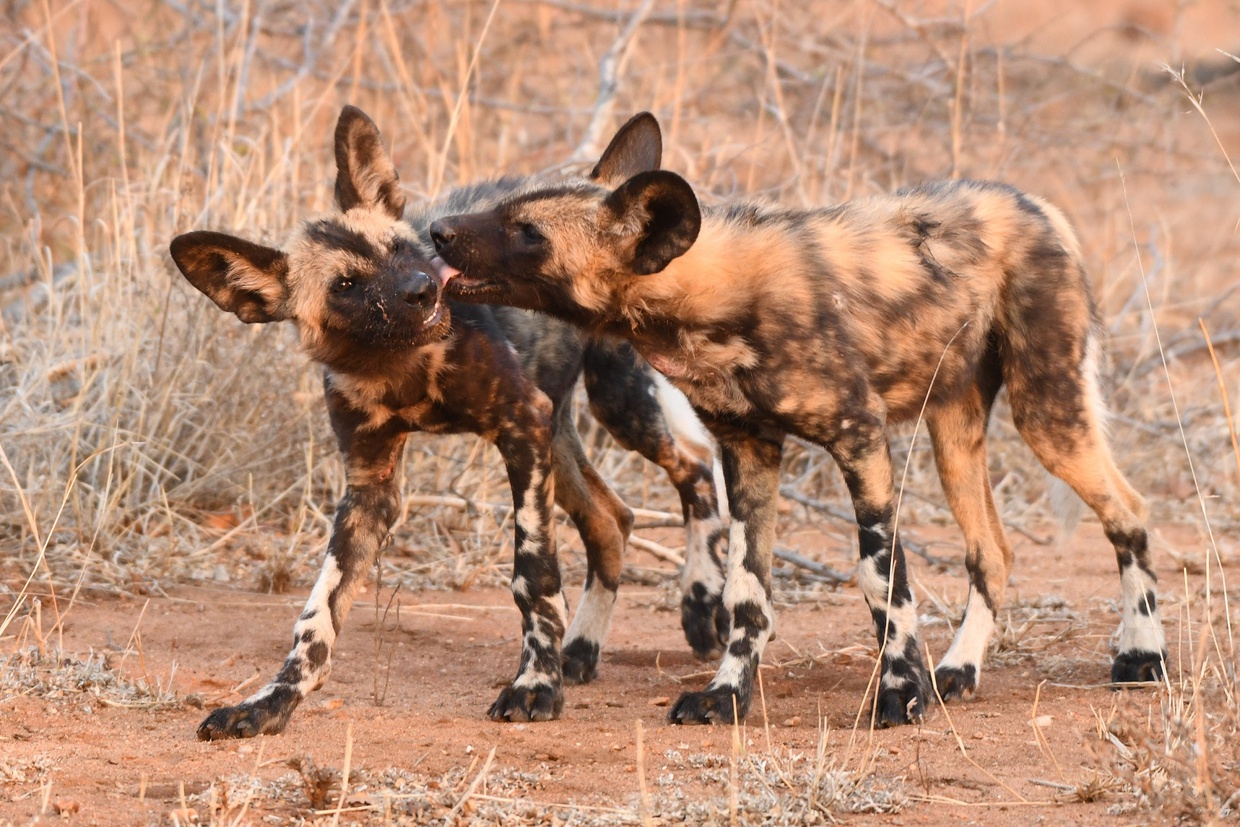 5. There are many mouths to feed!

The alpha female can give birth to anywhere between 2 and 22 pups in a litter. That's a huge number of mouths to feed! Last year, one of our local wild dog packs had 19 puppies - more than double the average litter size of 5-8 pups as in most domestic dogs. It is, however, unlikely that all of these youngsters will survive to adulthood. Some may perish at the hands of competing predators such as hyenas or lions, and there have even been documented instances of puppies being taken from the den by pythons and eagles!

As if the pups didn't have enough challenges to overcome in the bush, an interesting new dilemma facing this species is climate change. Being diurnal predators, wild dog packs do most of their hunting in the daytime. As daily temperatures continue to rise, the dogs are spending less time hunting in the hot weather and subsequently giving less food to their pups. As pup survival rates continue to drop, it is becoming ever-clear that even the most seemingly well-adapted animals in the bush are not immune to the effects of global warming. 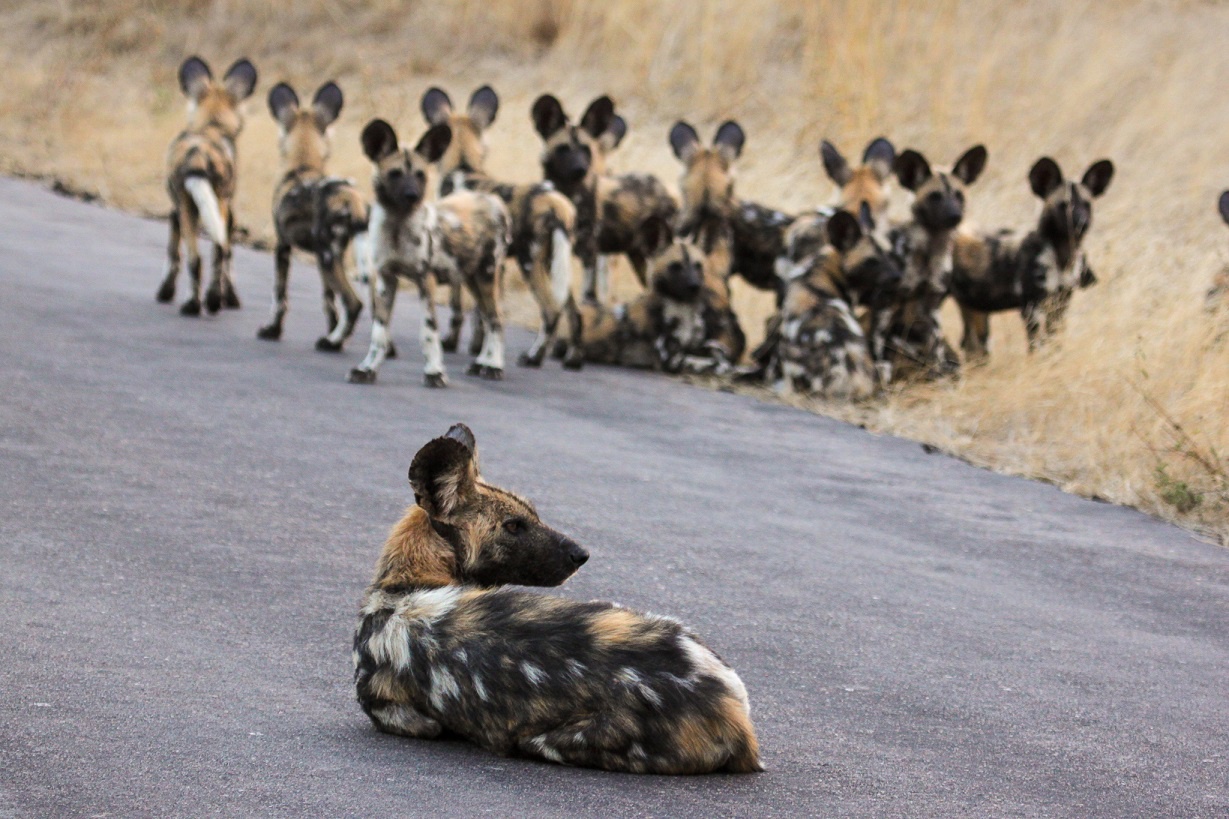 Wild dogs are the most notoriously difficult to find of all our predators out here. This is not because of their elusive or shy nature (they are, in fact, completely at ease around the game vehicles) but rather due to the unpredictability of their movements throughout massive home ranges, which can vary in size from 200 - 700km². These territories may overlap on the peripheries, particularly if the neighbouring packs are related in some way, so we are fortunate to see at least two different packs frequenting our area of the Klaserie.

One of the biggest threats to wild dog populations is the continued encroachment of people into natural areas, limiting the available space for these largely nomadic canines. In fact, a study published in 2017 found that the African wild dog was one of the hardest hit in this regard, having lost some 93.2 percent of its historical range as the boundaries of protected areas continue to shrink. 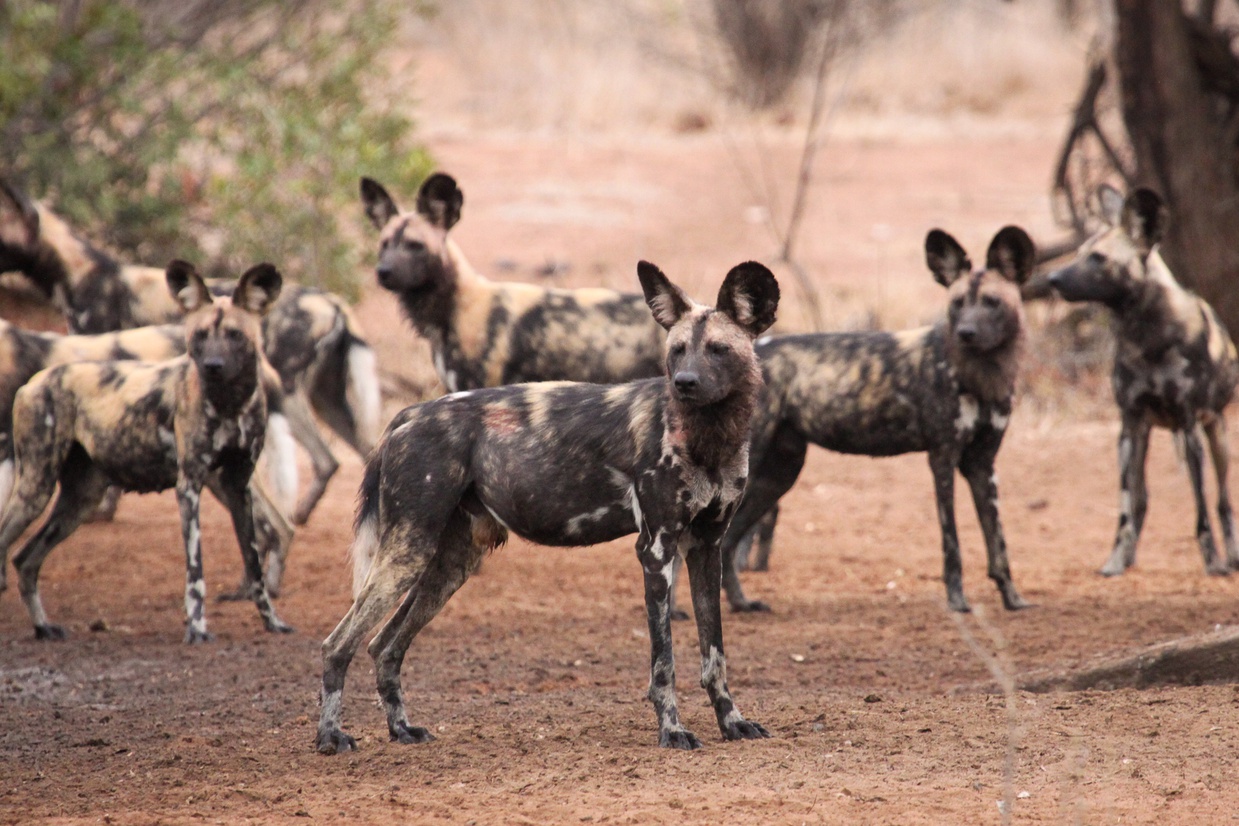 7. From pest to protected: Returning from the brink of extinction

Two decades ago, the population of African wild dogs was nearly 600,000 across the continent, but now their numbers have dwindled to fewer than 5,000 individuals. So, what is the reason that wild dog numbers have declined so rapidly? In addition to the habitat loss mentioned earlier, wild dogs were (and, to some extent, still are) viewed as pests by local farmers, having learnt that coralled livestock makes for easy prey. In an effort to protect their livelihood, farmers will often retaliate with lethal control, poisoning or shooting the culprits.

Some wild dogs are caught as a by-product of illegal snare activity, which is usually designed to target antelope for bushmeat. Others perish as a result of diseases which are currently ravaging the species, such as canine distemper, parvo virus or rabies. Luckily, there is a vaccine for canine distemper which is being administered by some researchers, and has proven to be almost 100% effective in preventing transmission of this deadly disease. Reassuringly, as an endangered species, there are many well-known conservation organisations that have introduced initiatives to mitigate human-wildlife conflict and protect the African wild dogs and their precious habitat. 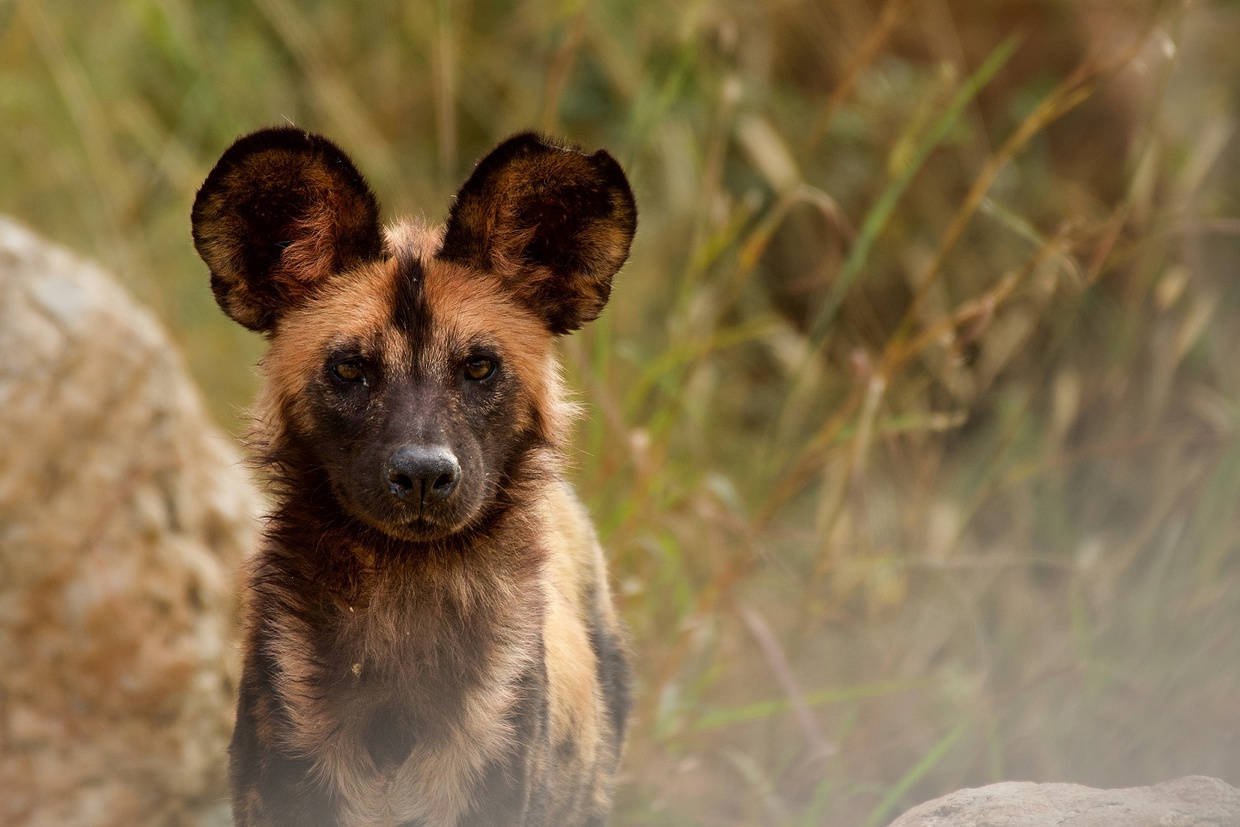 I think you'll agree that these charismatic canines certainly deserve to be featured on any safari-goers wishlist (despite requests for such an unpredictable animal making our guides break out in a sweat)! While many first-timers on safari may not have heard of the wild dogs before, we hope that articles like these will inspire you to learn more.

If you enjoyed this article or learnt something new today, please click "Share this post" on the right-hand side of this page and help us to raise awareness about these incredible yet endangered creatures.

We'd love to hear from you! Is there a particular plant, animal or bird you would like to know more about? Let us know by commenting on our Facebook or Instagram posts!