Focus on Birds: The ever-observant Oxpecker! 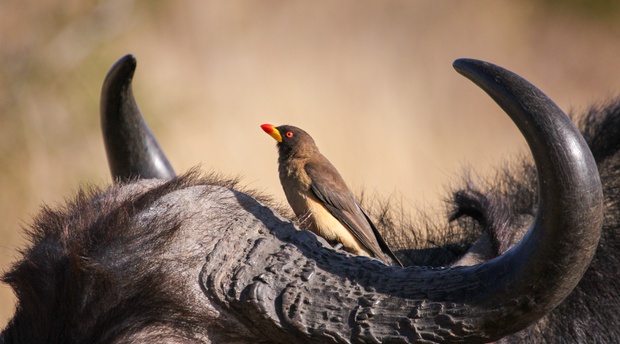 "What's that bird sitting on the animals?"
This is a question we get asked regularly as guides when our sharp-eyed guests notice that some of the wildlife are seemingly carrying around a few feathered hitchhikers.

I love this question as it allows me to launch into my favourite facts and stories about these resourceful little birds: the oxpeckers.

As scientists delve deeper into the world of these avian anomalies, we are learning more and more about their relationships with other, larger animals and the unique niche they fill in their environment.

Throughout sub-Saharan Africa, they collectively feast on the parasites carried by over 20 species of mammal. In the Klaserie, this commonly includes rhino, giraffe, buffalo, kudu, zebra, impala, hippo and warthog, among others. 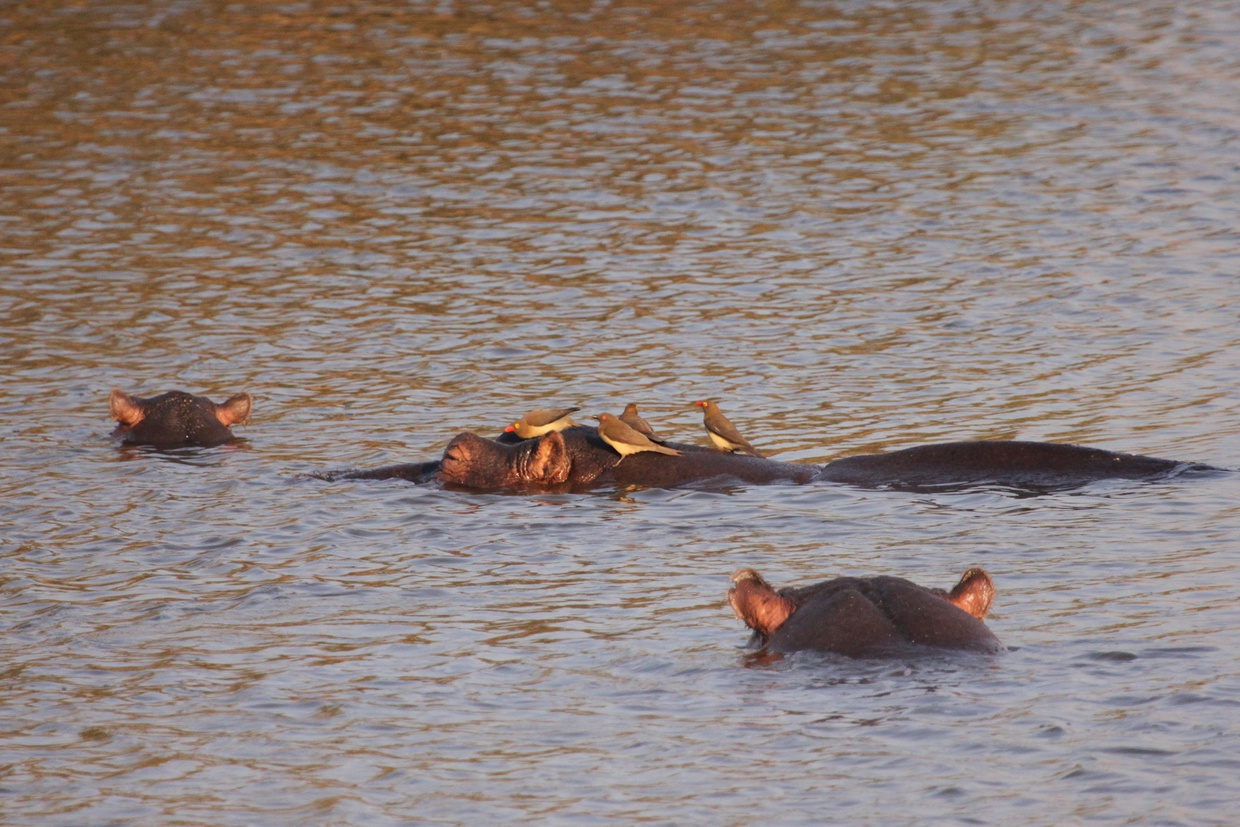 These two species are perfectly adapted to their unique lifestyles and diet. The red‐billed oxpecker is smaller and has a scissor‐like bill, preferring to associate with a wide range of hosts from warthogs and impala through to rhino and, in some areas, even elephants.

On the other hand, the yellow‐billed oxpecker is larger and has a broader and flatter beak. They much prefer larger hosts such as buffalo, rhino, eland and giraffe that carry far greater numbers of ticks, and have even been found roosting on these animals at night-time!

By eating ticks from their hosts, the oxpeckers can feast on a food item that is abundant and scarcely competed for and their hosts benefit from having these itchy and irritating parasites removed. In biological terms, we call this 'win-win' scenario a mutually beneficial relationship, or mutualism. 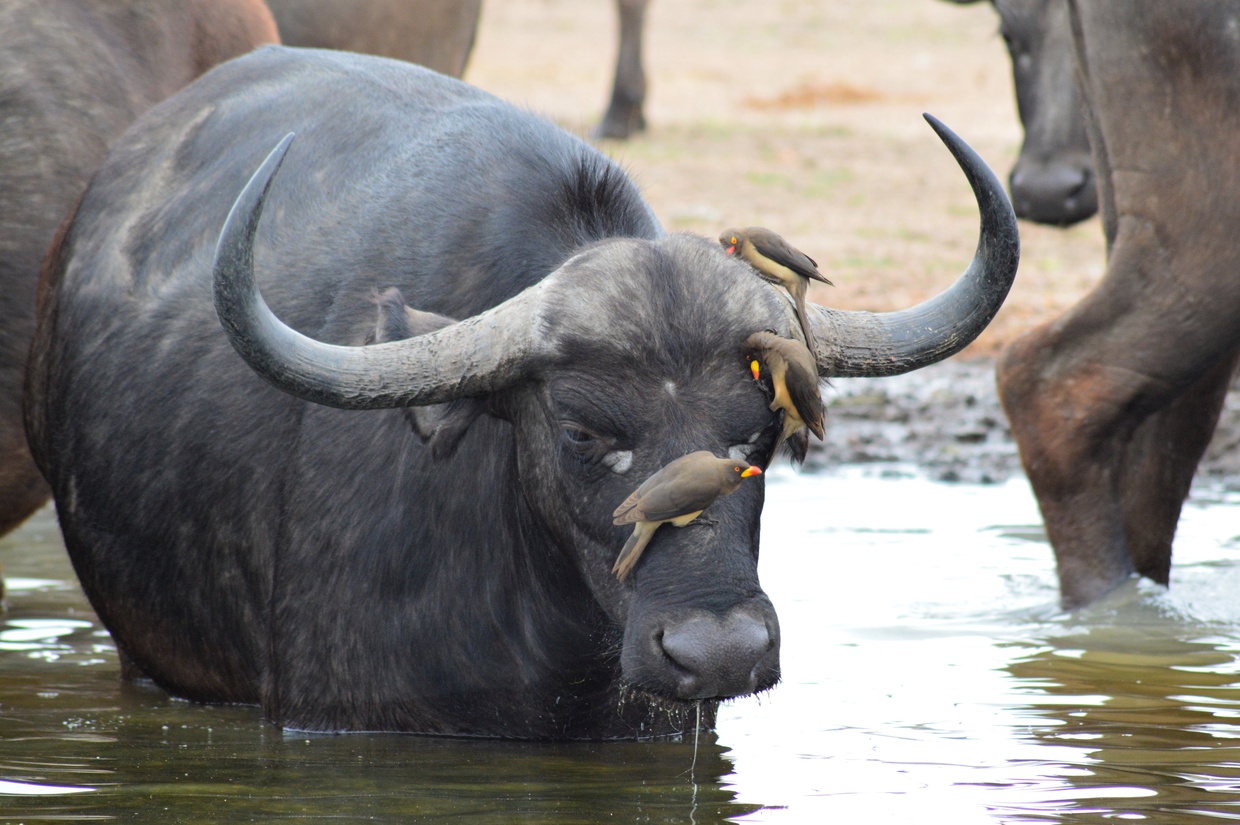 However, this lovely example of interspecies 'togetherness' may be covering up a few of the oxpecker's more selfish habits. It turns out they are also blood-thirsty little birds with a tendency to pick at an animal's open wounds. In doing so, they keep the sores clean but also prolong the healing process.

Their bill acts like a comb as they diligently groom through the fur of their hosts. As they do so, they collect some of the hair which they use to line their nests in tree cavities. However, from the host's point of view, this may be a small price to pay for the luxury of your own personal travelling spa service!

You may imagine it is tricky to hang on to a large animal as they move through the dense bush but oxpeckers are able to manoeuvre themselves with ease. Thanks to their short legs and strong, sharp claws, they are able to cling closely to the body of their host, even hanging upside down to stick their heads into the ears and nostrils - much to the irritation of their host! 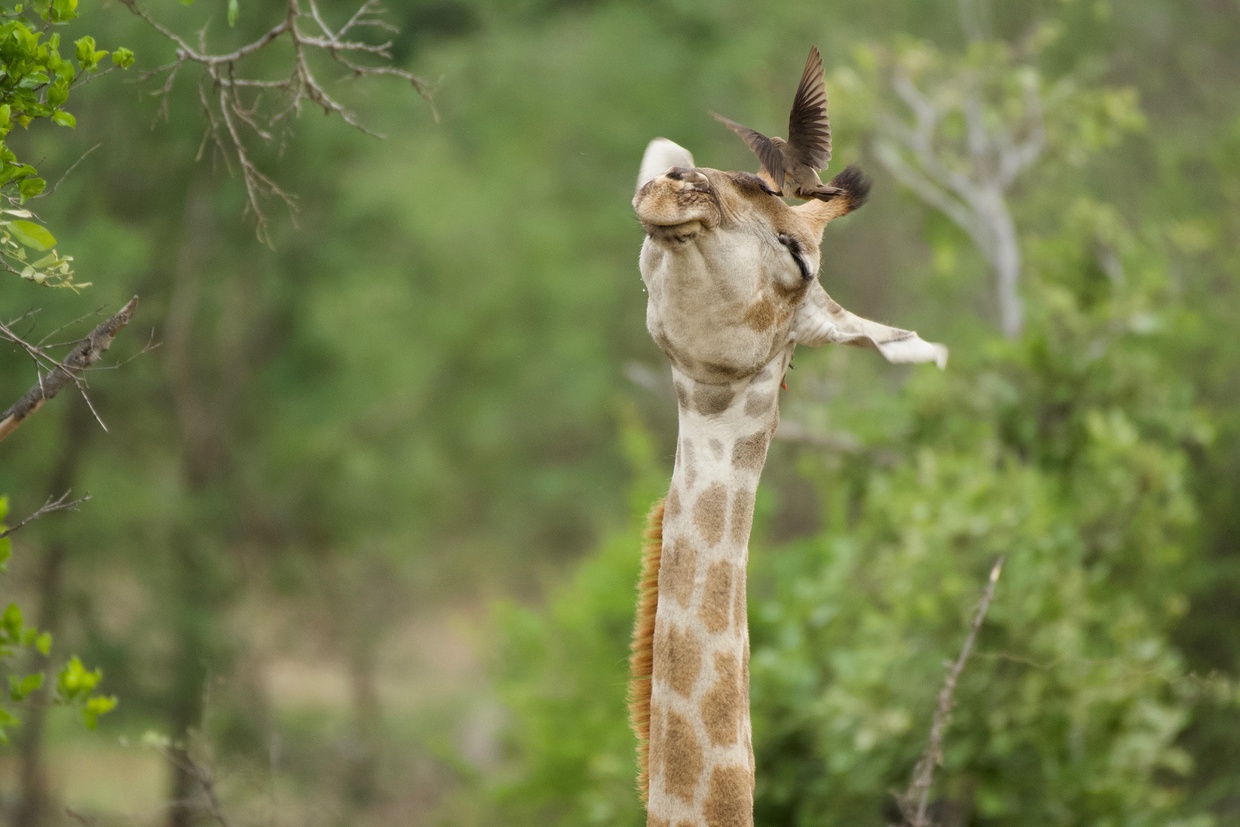 Oxpeckers also provide another benefit to their hosts: they have fantastic vision and make a hissing or rasping alarm call when they perceive something potentially threatening approaching. As guides, it is important that we familiarise ourselves with this sound, as it can often alert us to the presence of a potentially dangerous rhino or buffalo while on foot in the bush.

In Swahili, red-billed oxpeckers (pictured below) are known as Askari wa kifaru, which means "the rhino's guard" and recent research shows that this indigenous name may actually ring true.

They behave very much like sentinels, perching on a rhino's back and sounding the alarm when they spot potential danger. This can have huge implications for endangered rhinos, whose sense of smell and hearing is acute but their poor eyesight makes them an easier target for illegal poaching.

Experiments found that rhinos who did not carry oxpeckers only detected a human approaching them 23% of the time. Those carrying their feathered guards detected the approaching humans 100% of the time, thanks to the bird's alarm calls. 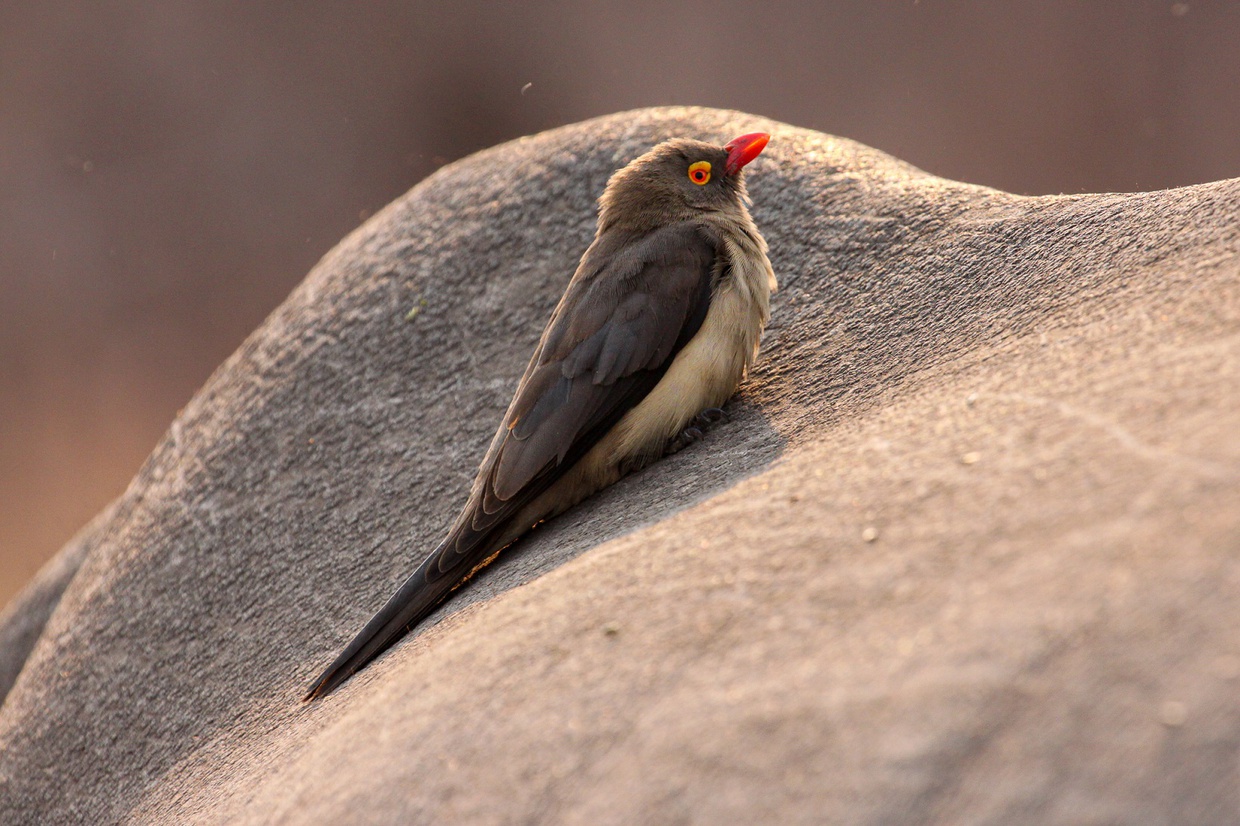 Even more interestingly, when a rhino heard the oxpeckers alarm calling, they almost always turned themselves to face downwind. This is their sensory 'blindspot' as they cannot smell predators from downwind and it is the position they are likely to be most vulnerable to attack, particularly from poachers.

While it is not clear whether the oxpeckers are intentionally alarming to alert the rhino of danger or simply aiming to notify other oxpeckers, it is certain that the rhino has learnt to 'eavesdrop' on their conversations for its own safety.

This eavesdropping behaviour is certainly not uncommon among our wildlife, with many savanna herbivores learning to understand the alarm calls of their neighbours, particularly those who are targets of the same predators. However, you might agree that a large mammal recognising and understanding certain bird calls is an undoubtedly fascinating behavioural insight! 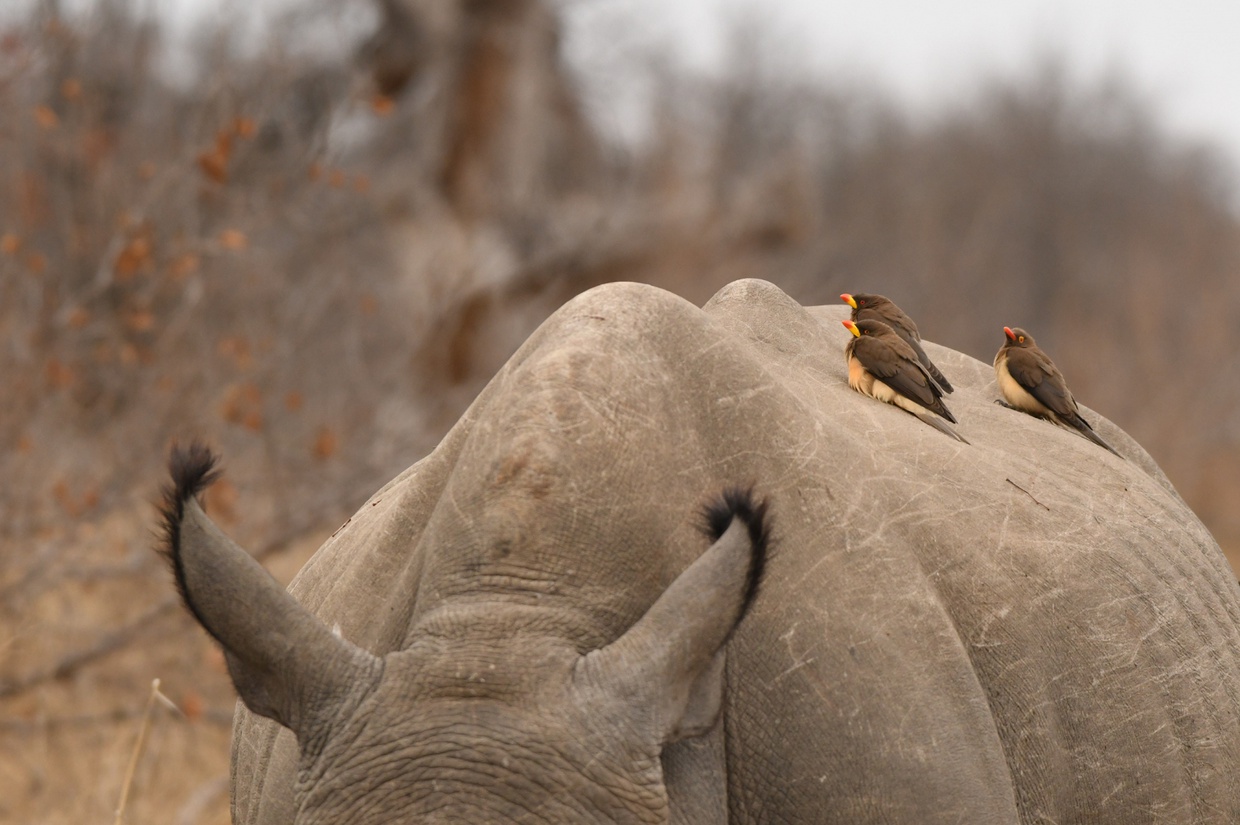 Unfortunately, oxpecker numbers have significantly declined over the years, even becoming locally extinct in some areas. This is partly due to the fact that many of their preferred host species are declining due to poaching, for example, the white rhino.

Many of South Africa's well-known private nature reserves, including the Klaserie, also used to be cattle farms. During this time (and to this day on established farms), pesticides such as cattle dips were used to kill the ticks on livestock. These chemicals were found to be toxic to oxpeckers and many perished due to secondary poisoning.

The Endangered Wildlife Trust (EWT) have been capturing and releasing red-billed oxpeckers back into areas where they used to occur in the hope of re-establishing these populations. So far, over a thousand oxpeckers have been successfully translocated to these areas. It is hoped that, with the help of farmer awareness programs, they will continue to breed successfully and prosper from the remarklable relationships they form with their giant, mammalian hosts.