Focus on Birds: Vultures, the unsung heroes of the bush! 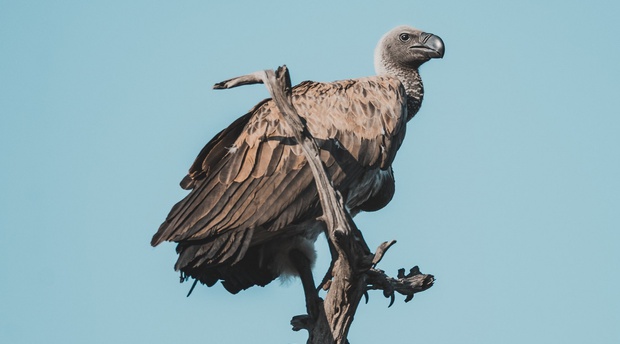 Vultures are certainly not cute and cuddly, their apparent forboding of death giving them a rather sinister appeal. But these birds are actually extremely valuable and essential members of a healthy ecosystem and play a pivotal role in preventing the spread of nasty diseases in other animals.

Here, we delve into the fascinating lives of vultures and discover how they eavesdrop on other birds to find food, why they are able to eat rotting meat without falling sick, and what is contributing to the massive decline of vultures in the wild.

In fact, vultures are so widespread that you can find them on every continent except Australia and Antarctica. The species that we see most commonly at Klaserie Sands are the White-backed vulture, Hooded vulture, and (if we are really lucky) the Lappet-faced and White-headed vultures.

Stereotypically, circling vultures have become the harbinger of death with many assuming that these soaring scavengers must mean there is a kill nearby. This is often, but not always, the case. Following a brief stint of flapping to get themselves airborne, the vulture's enormous wingspan enables them to soar effortlessly on invisible air thermals. 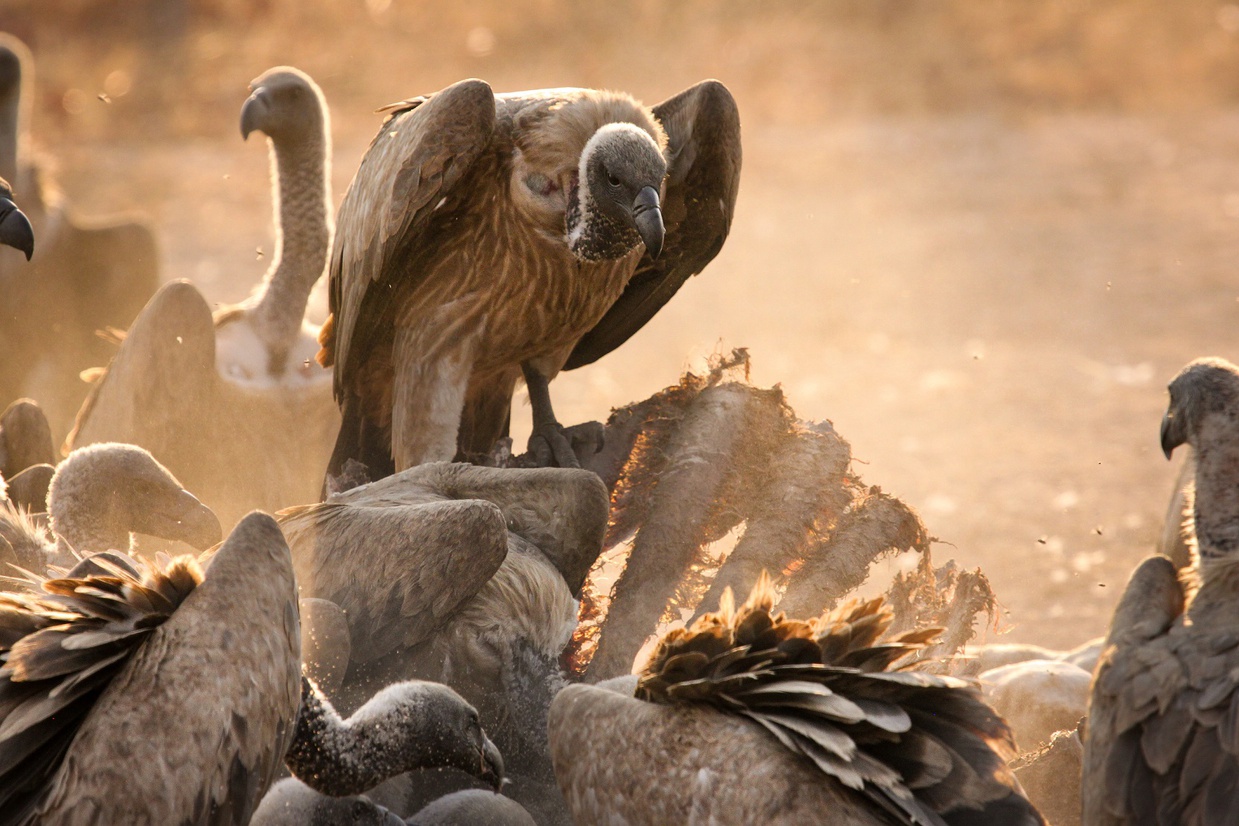 These cylindrical towers of rising hot air are exploited by all manner of raptor species. A vulture's wing is cleverly designed to manipulate aerodynamics and keep them aloft, by creating differences in air pressure above and below the wing. This means vultures can save precious energy by circling in these thermals without flapping their wings. But how do they find these thermals in the first place?

Indeed, the first to take to the skies may locate them by trial and error, but it also appears that vultures are 'eavesdropping' on the movements of other birds in the sky. Researchers knew they employed this technique to find food (as I will go on to discuss), but only recently did they find vultures using it to locate thermals.

Having spotted other birds soaring in circles some distance away, vultures will pick up speed and fly straight towards that area, and White-backed vultures have been clocked gliding between thermals at speeds of up to 65 km/hour! 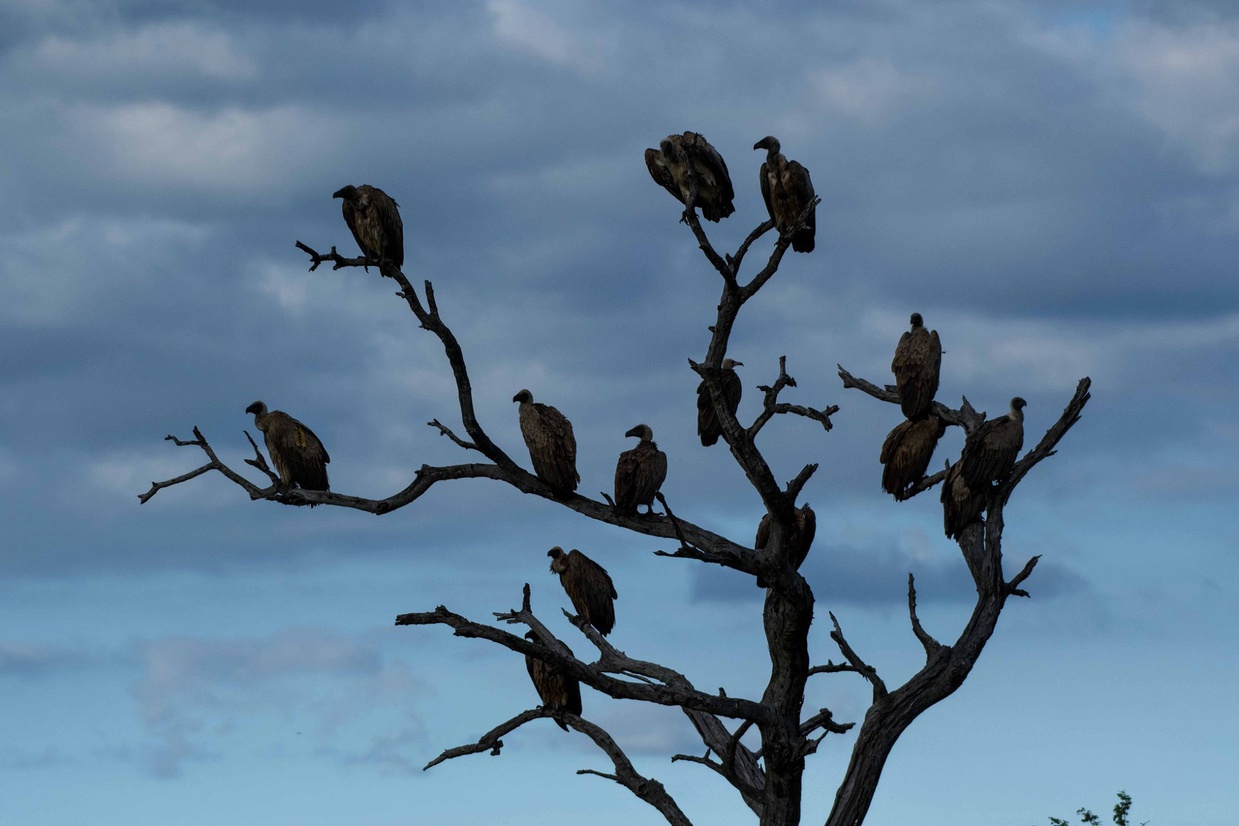 Because these thermals are created when the sun's rays heat the earth, they are usually strongest around midday. Vultures are therefore more likely to be found perched in trees in the early morning, waiting for the air to warm up before they go in search of their next meal.

Their particular choice of perch is not a coincidence either, with most vultures showing a marked preference for settling in the skeletal branches of big, dead trees. This certainly adds to the eeriness of their characters, but makes perfect sense when it comes to easing their take-off.

Having such massive wings allows vultures to soar endlessly through the African skies, but also makes it a challenge to launch. This is particularly the case for the largest of the species, the Lappet-faced vulture (pictured below), who boasts an impressive 2.7 metre (8.9 ft) wingspan! By alighting in dead trees, vultures give themselves the space to spread their wings for take-off without risking their feathers getting caught in any surrounding foliage. 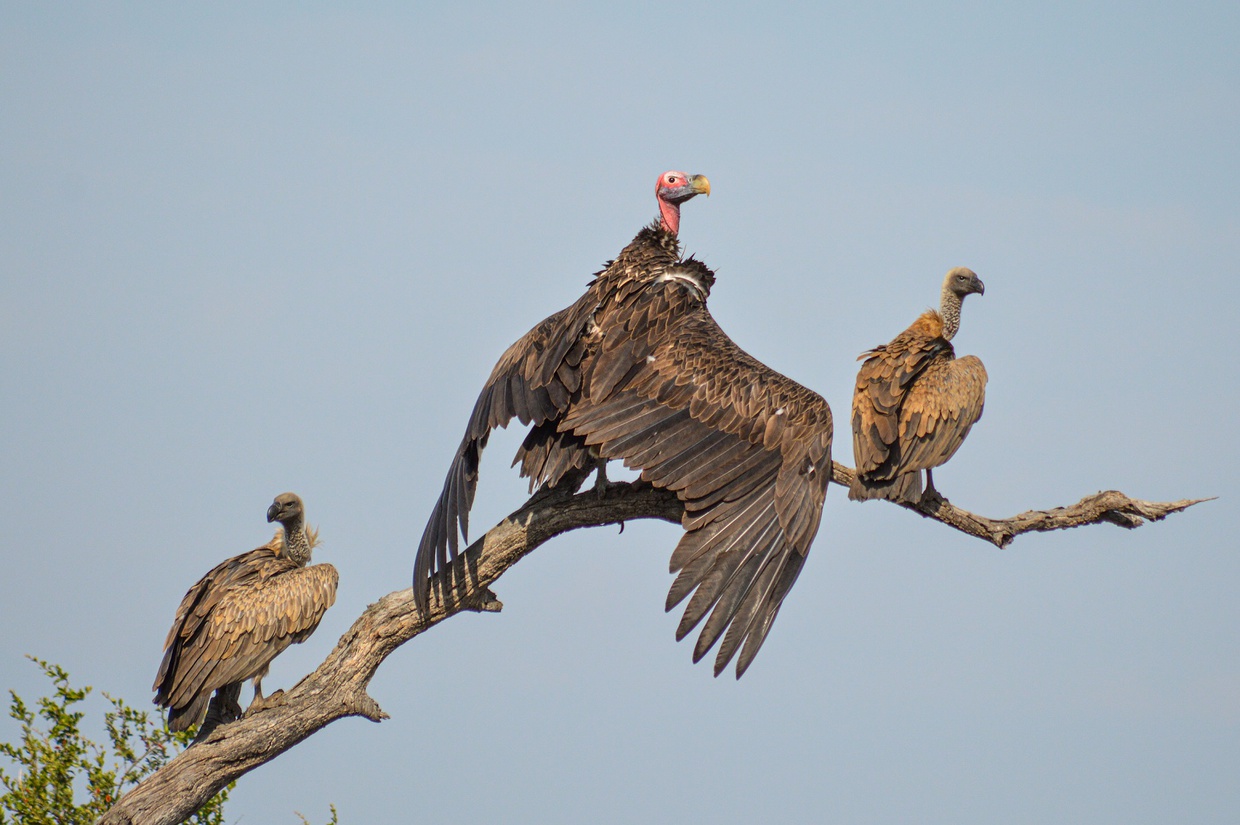 While New World vultures have a superior sense of smell, their Old World counterparts in Africa are not bestowed with the sharpest of noses. Death can take an unlucky animal at any time and in any place, so there is no way of vultures predicting where they will find their next meal. Instead, they rely on their acute vision to locate food and it seems the more eyes the better!

Hooded vultures (pictured below), are the smallest of the lot and typically fly at a lower altitude. This means they are often the first to spot potential scavenging opportunities and are therefore likely to be first on the scene. Vultures also watch other raptors, such as Bateleur and Tawny eagles, whose keen eyesight means they are well-equipped to spot carrion from the skies.

Vultures may even watch ground-based carnivores, such as lions and wild dogs, and follow them as they go hunting. By keeping a close eye on these tell-tale species, a chain reaction begins and vultures start to follow each other to the site of a kill. This is how you can go from having one or two vultures at a carcass to hundreds descending from the skies, as if from nowhere. They will even employ the superior 'food preparation' skills of the eagles whose sharp beaks can tear open tough animal hides that vultures are not quite as well-equipped to access. 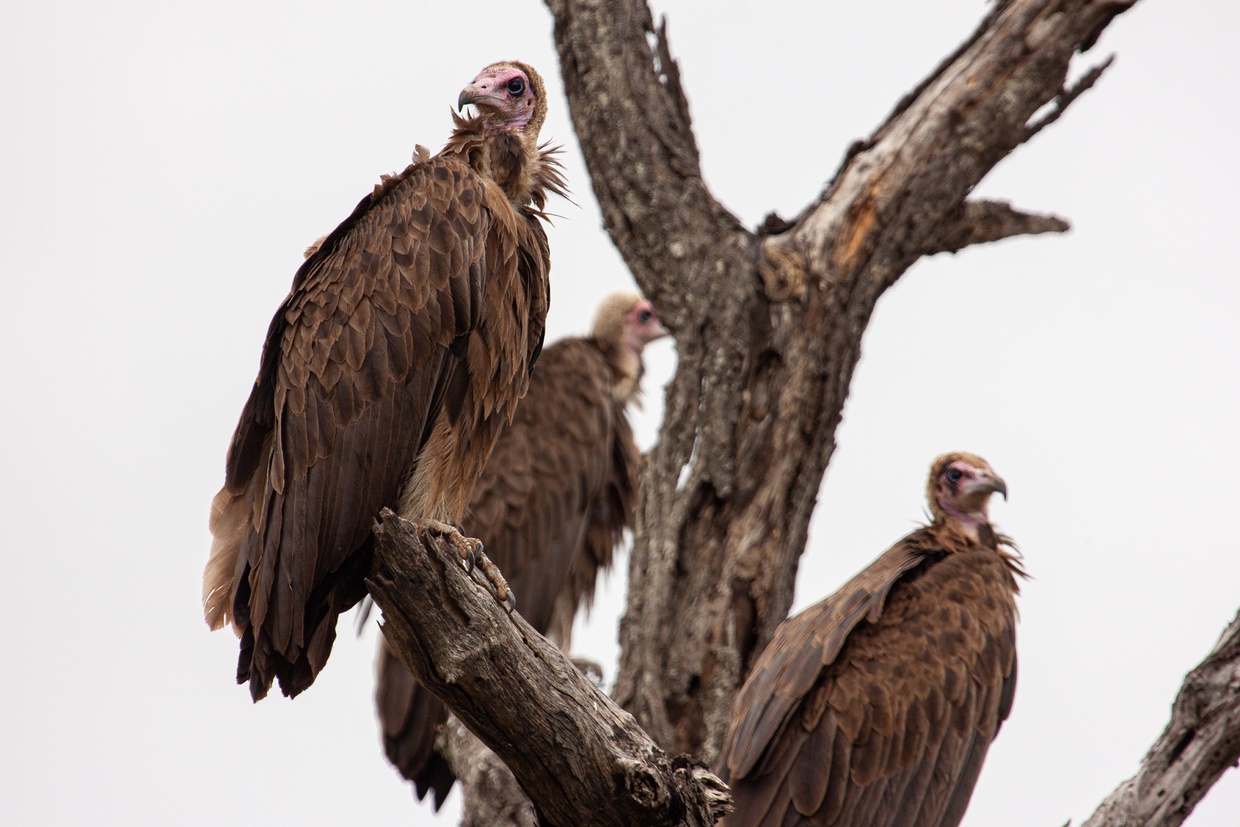 Once feasting on the decaying remains, it becomes a fight for the best seat at the dinner table. Amidst the aggressive hisses and grunts, swarms of vultures will engage in a feeding frenzy which can sometimes result in unlucky diners becoming trapped inside the carcass.

The aim of the game is to fill a muscular pouch near the throat, known as the crop, with as much food as possible. White-backed vultures can fill the crop with a kilogram of meat in a matter of minutes, before making way for others to do the same. Hooded vultures, on the other hand, will often fly away with a chunk of meat to eat it elsewhere. In less than an hour, carcasses can be stripped down to just the bony remains.

As you would imagine, feeding on carrion requires these birds to have ironclad stomachs. They are constantly exposed to bacteria and pathogens harboured within decaying flesh, yet they are able to resist the nasty infections that could easily kill other animals. But how? 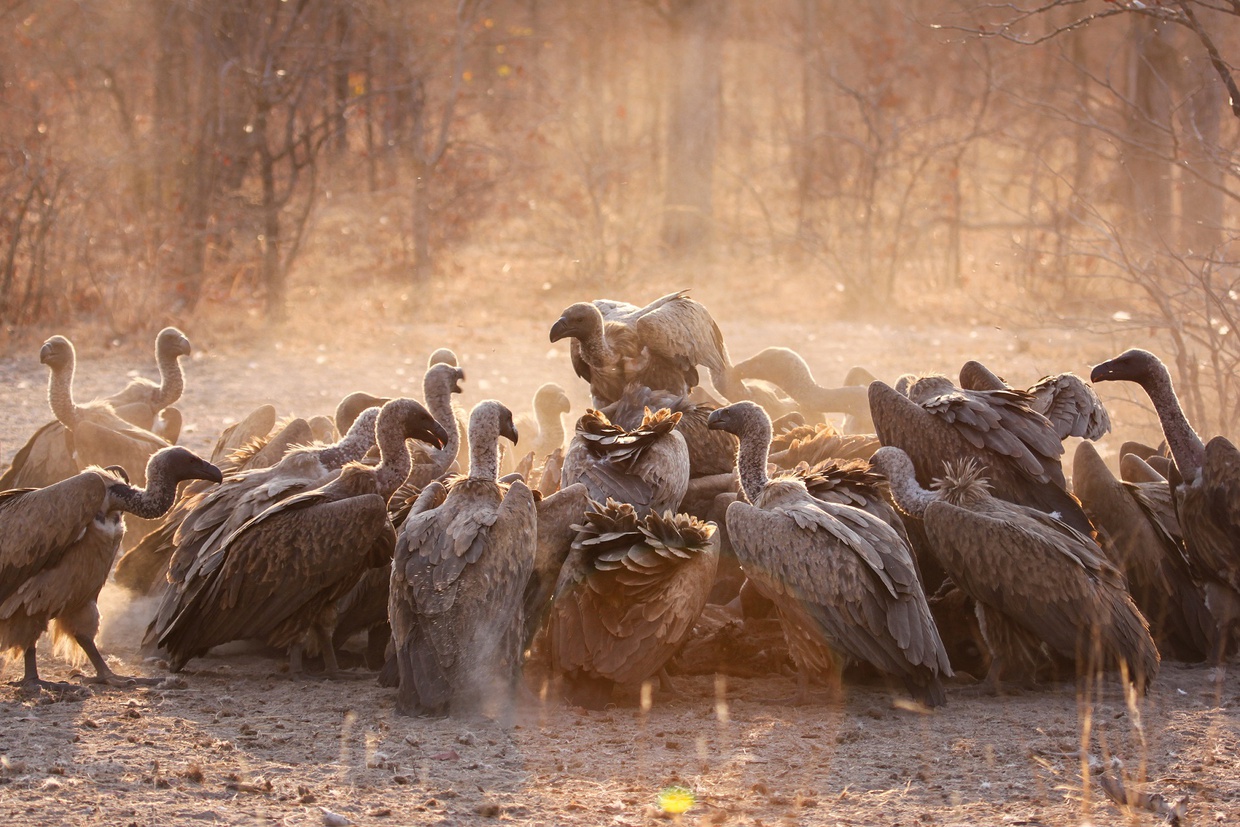 Interestingly, the vulture's scavenging secrets lie in their unique genetic make-up. They have evolved an extremely tough digestive system that contains its own bacteria, similar to the disease-causing ones found on rotting meat.

A vulture's stomach is also extremely acidic, sitting at a pH of 1-2 which is far more acidic than that of other carnivorous birds, including owls and herons. This deadly combination of microbes and stomach acid is enough to destroy anything that passes through the vulture's gut.

While these messy feeding habits are enough to turn anyone off their dinner, vultures are actually fairly cleanly creatures. Their characteristically bald heads act as a sanitary measure, preventing facial feathers from getting covered in blood and meat while they feed.

A more recent discovery also found that this bare skin helps the birds to regulate their body temperature. On a hot day, vultures will extend their necks and wings to cool down, and tuck their heads under their wings on cold days to prevent this heat loss. 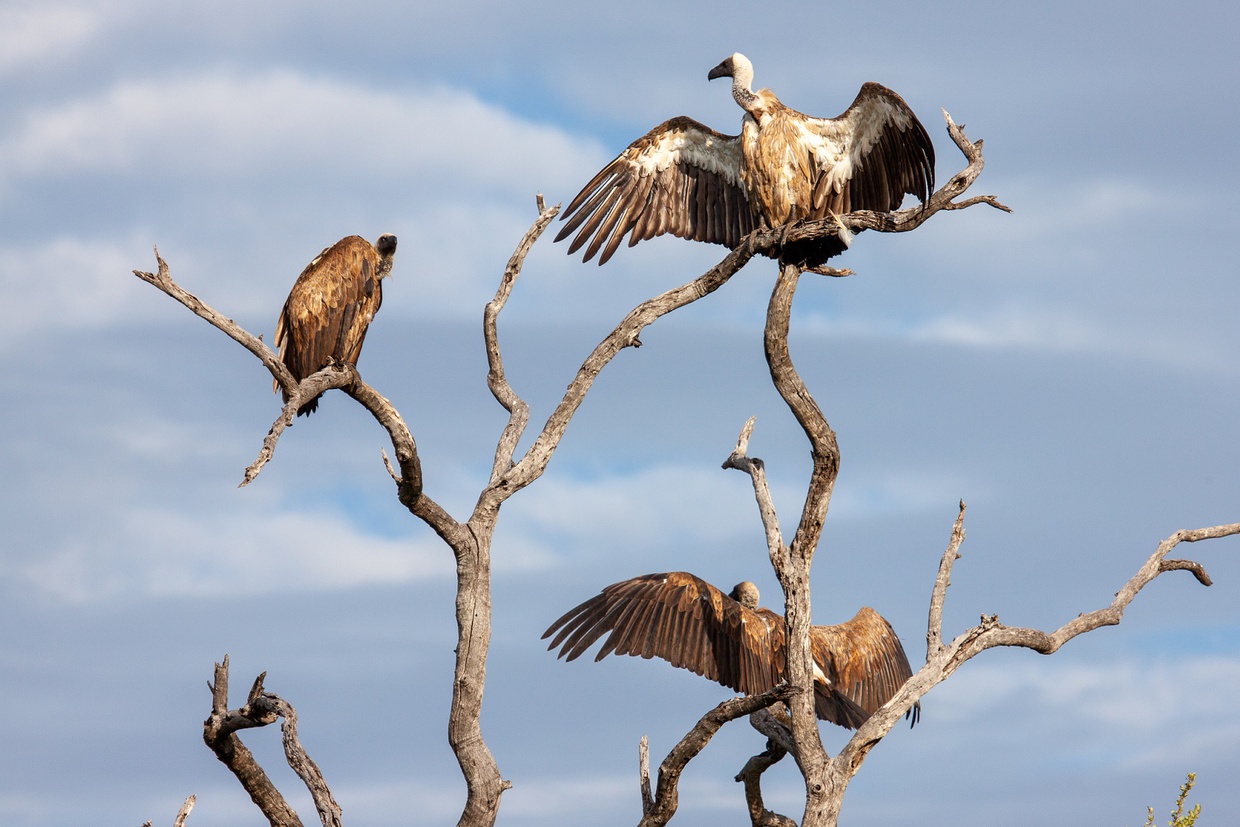 But, that's not all! Vultures also urinate on their legs - a behaviour known as urohydrosis. What may seem disgusting to us is actually another ingenious mechanism for cooling down. As the urine evaporates, it cools the skin in the same way our sweat does. Being so acidic, it also helps to disinfect their legs from any bacteria they have picked up while hopping around a carcass.

Seeing hundreds of vultures gathered around a kill makes it difficult to believe that there are so few of them left in the wild. In fact, sub-saharan Africa is in the midst of a vulture crisis and the greatest threat to these birds right now is poisoning.

Farmers typically use poisons to target predatory pests, such as lions and jackals, which pose a risk to their livestock. These poisons are so toxic that they can cascade through the entire ecosystem, affecting all of the birds, mammals and insects that come to feed on the carcass. Although this practice is illegal, it is seldom persecuted.

Similarly, vultures can act as sentinels to illegally poached animals. Many fall victim to poachers who poison the carcasses of their quarry to prevent them from giving away the location. Last year, as many as 530 vultures were killed when poachers poisoned three elephant carcasses in Botswana, a perfect example of the broader and more severe ecological fallout that can occur from a single poaching event. 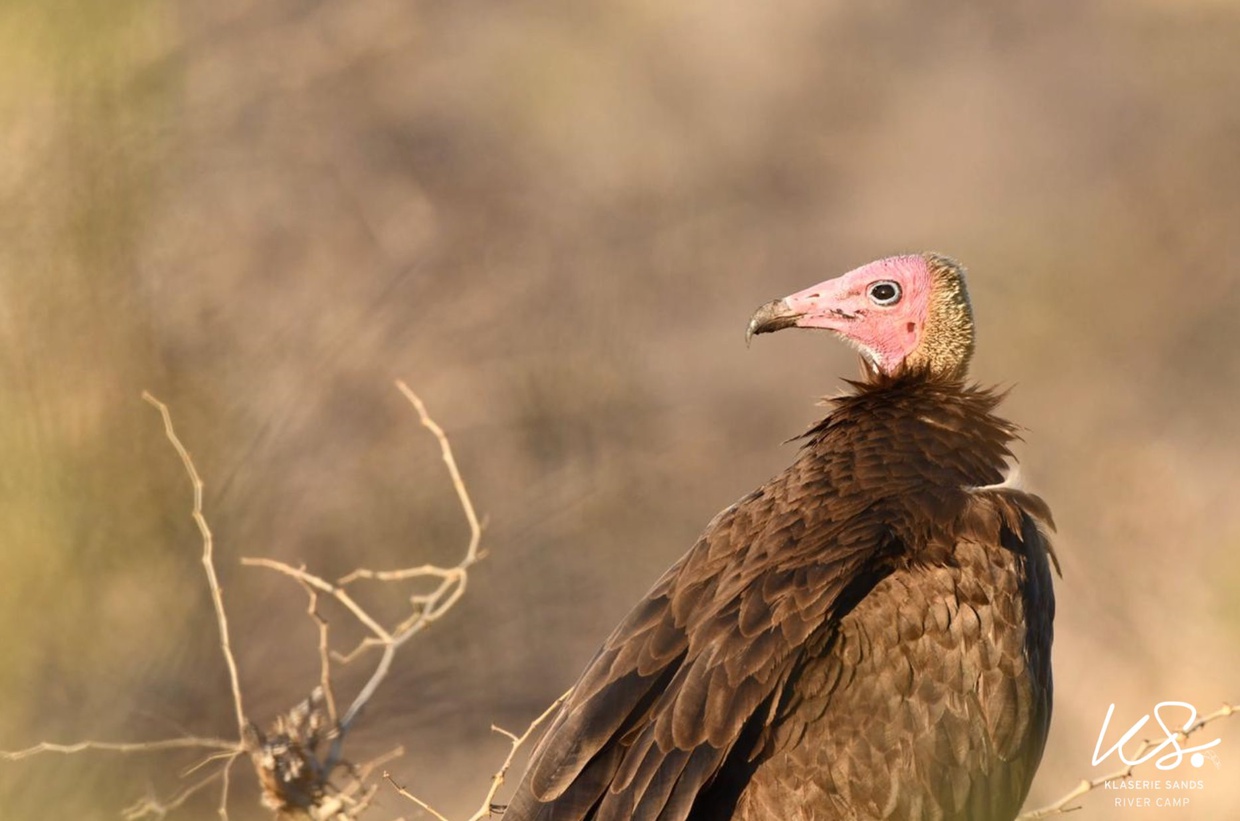 Finally, vultures are a major part of the muti or traditional medicine trade in Southern Africa. Their acute vision and ability to find prey has led many to believe that the head or brain bestows a person with clairvoyant powers, enabling them to see into the future and also boost their intelligence.

Interestingly, when the Soccer World Cup came to South Africa in 2010 the poaching of vultures sky-rocketed, driven entirely by gamblers hoping to harness these supernatural powers to predict the winning outcome!

It is estimated that there are 1,250 vulture traders, hunters and traditional healers involved in the South African vulture trade with the total value of their sales reaching a staggering R1.2 million ($USD 120k) per year! It is therefore unsurprising that eight of Africa's vulture species have declined by 62% in the last 30 years, six of which are now considered to be critically endangered.

The disappearance of this aerial clean-up crew may have devastating consequences for ecosystems, with diseases such as anthrax and rabies spreading out of control in wild animal populations. Regulating pesticide use and using education programs throughout Africa may be the cornerstone to protecting these endangered species from iminent extinction. They may not be cute and cuddly but without them, the bush simply wouldn't be the same.